I recently was in New South Wales and made an effort to go and catch up with the team at the Historical Aircraft Restoration Society (HARS) Parkes Wing.

As many of you, our readers will know HARS has its well established home at Albion Park south of Sydney in New South Wales. The not for profit agency has grown from its very humble beginnings where it had mainly wrecks and relics to the now three bay large scale hangars and facility with a huge collection of aircraft. Ranging from Tiger Moth to a 747 some of the aircraft at Albion Park include: Three C-47 / DC-3 aircraft including “Hawdon”, TAA’s first aircraft which ASO was very proud to be apart of the team who delivered the aircraft to the collection. ( see link here: http://aviationspottersonline.com/a-flight-back-in-time-flying-in-the-douglas-dc-3c-47-vh-aes-hawdon/)

With this many airframes it wasn’t long before space became an issue. The Parkes annex was started initially as a flow over of un-restored airframes and future display items.

The airfield’s deep wartime history marks the home of an aviation museum even more befitting.

Dave’s latest challenge is one of enormity, not just the physical size but the work needed to restore Lockheed SP-2H Neptune A89-272, truck it from its old Townsville base in Northern Queensland to Parkes and restore it. As this was the teams latest acquisition and one which required a Herculean effort to dissemble, truck and now reassemble and restore we thought we would spend some time with this airframe first. 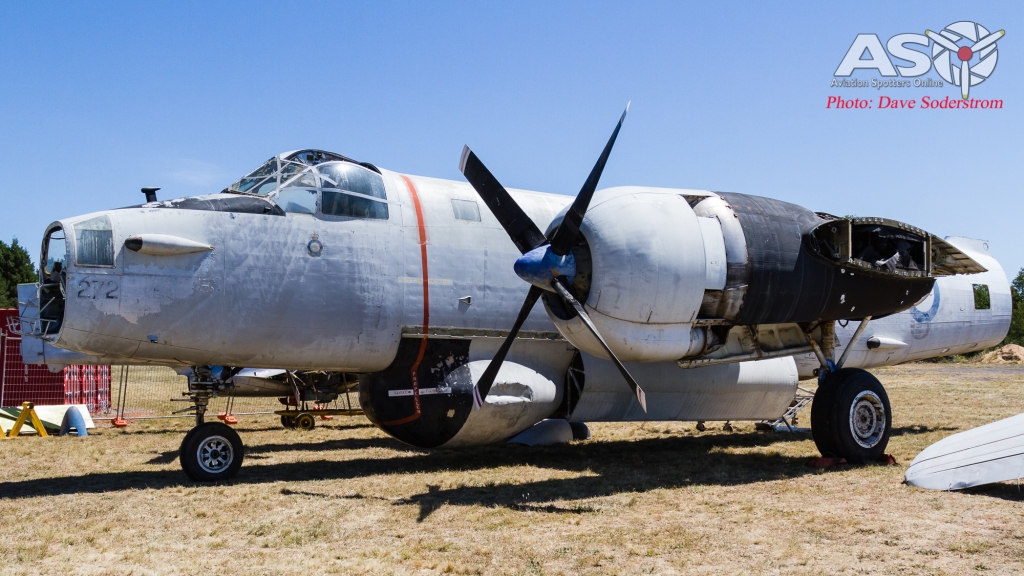 Defence Heritage Disposals issued an open tender for Aviation Museum’s to tender for this airframe in early 2017. Located at RAAF Townsville the former home of 10 Squadron which operated the Neptune from the base between 1962 until retirement in 1977 when replaced by the younger Lockheed brother the P-3 Orion.

10 Squadron was formed in 1939 and its personnel were soon deployed abroad in the United Kingdom flying Short Sunderland flying boats. Originally 10 Squadron was sent to train and bring back the flying boats to Australia. When war broke out these plans changed and it wasn’t until the end of hostilities the Squadron retuned to Australia and were disbanded in 1946.  The Squadron was soon reformed to operate the new maritime patrol aircraft the Avro Lincoln. The Lincolns were operated until their replacement by the Neptune’s of which 10 Squadron received twelve of  the new P2V-7 (later re-designated SP-2H).

As noted earlier 10 Squadron retired the Neptune in 1977 when it was replaced by the P-3 Orion. At this time the squadron and sister squadron 11 Squadron both relocated to RAAF Edinburgh. In recent times the Squadron has supported the Australian-led intervention into East Timor which occurred in 1999 and has contributed to the Australian maritime patrol detachment based in the Persian Gulf since 2003. This role has seen the squadron supporting coalition operations in Afghanistan and Iraq where missions were undertaken, like border protection duties, as part of Operation Resolute. 10 Squadron continues to operate the Orion until its future replacement the MQ-4C Triton high-altitude, long-endurance (HALE) unmanned aircraft system, enters service. 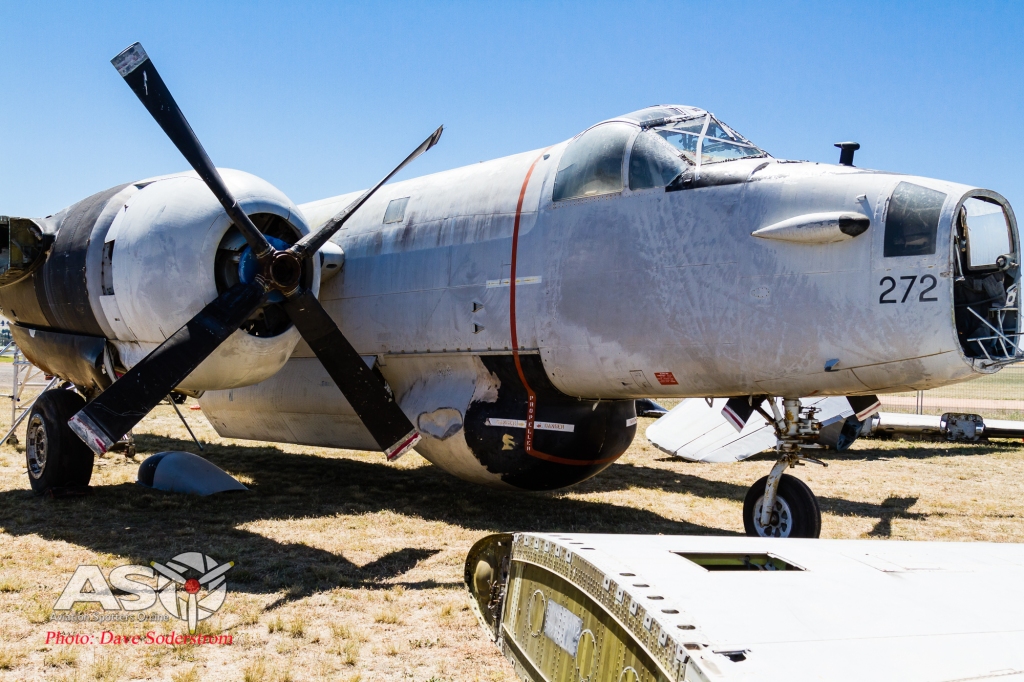 A89-272 was delivered to 10 Squadron in March 1962 at its Townsville operating base. Originally delivered in the dark blue with white top as seen in this photo from the Authors collection.

The aircraft became a gate guard to the base at Townsville and stood there until being damage by Cyclone Yasi in 2011. The RAAF combined parts from this airframe and A89-280 which then became the new gate guard at the airfield. As some parts of the airframe had become damaged from both weather and old age its actually surprising it wasn’t scrapped. However on close inspection the airframe will make a suitable static display and to this the HARS team have already recovered wanted and damaged parts from the USA which will make their way onto the aircraft during its restoration. As Dave showed me and explained its in far better condition then you would expect.

Another massive undertaking for the Parkes team was another ex RAAF aircraft recovery. Again the team was off to Oakey in Queensland to dissemble and recover DHC-4 Caribou A4-275. The aircraft arrived at the museum in 2016 where the volunteers have got the old work horse back together and looking its best in many years.  This Caribou was operated by both 38 and 35 Squadrons, and its final flight occurred in 2009. 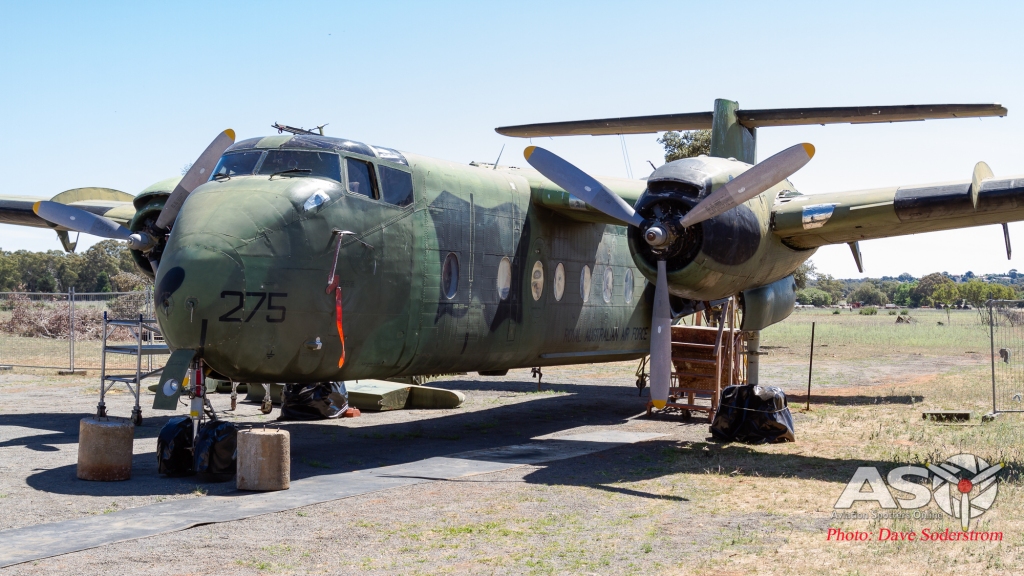 The airframe is very complete and brings the HARS fleet of Caribou’s to three and a half. Joining the two flying examples, VH-VBA A4-210 and VH-VBB A4-234, along with the fuselage of A4-179.

The next aircraft on display is Convair 580. This one is registered as VH-PDW. It was originally ordered new in 1953 by United Airlines in the USA as a CV-340 model, flying as N73136 ‘Maniliner Vancouver’. Its conversion to 580 standard was completed in in 1966 by Pacific Airmotive Corporation.  It was flown by several operators in Canada, before moving to Australia in 2007 to fly with Pionair Australia. It was retired in 2017 and is now part of the HARS fleet along side Convair 440 VH-TAA and also the soon to arrive C-131 from Arizona.

Another aircraft which in time will go on display is the Polish designed and manufactured PS-11 Iskra.This airframe was one of several which were imported into the country in the late 90s. This particular one hasn’t flown here yet.While being very complete it requires assembly after being transported from the main facility at Albion Park 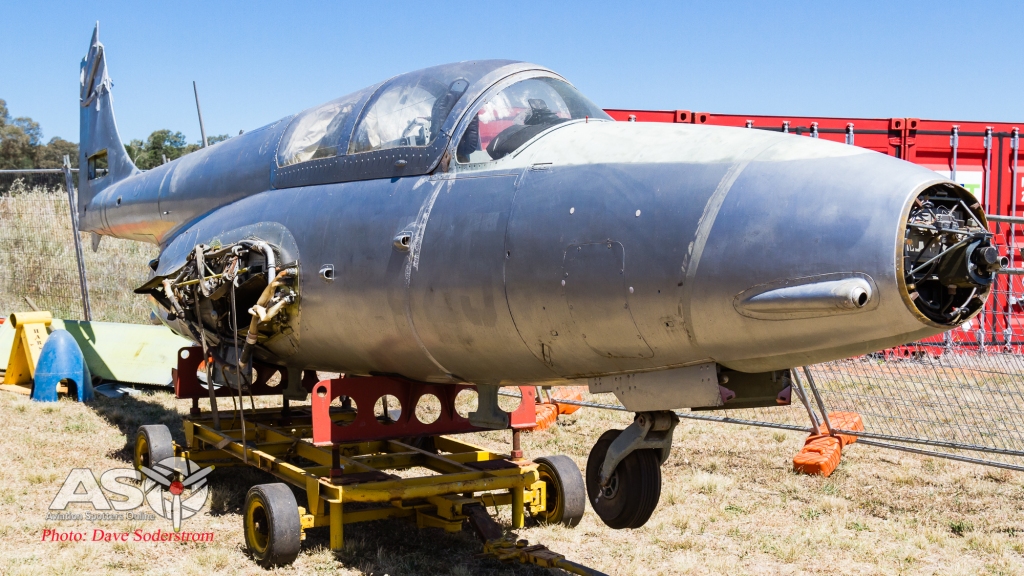 As we moved into the main display hangar which is currently jointly shared between the museum and a local Crop Dusting operation, we enter to see the variety of aircraft on display. As an annex to the main branch there is still some fantastic aircraft on display with several being very unique and one in particular very historic.

I’ll admit I was very excited to see the Lockheed 12A Electra, it was impressed into wartime service with the USAAF designated as a UC-40D flying as 42-38348. It was then issued to the RAF as LA623. After that it became part of famed Australian Sidney Cotton company Aeronautical and Industrial Research Corporation flying as G-AGWN.It came to Australia flying as VH-BHH in 1952 for Silver Airways. Its last commercial operation then registered as VH-FMS was flying as an air ambulance.

If you’re unfamiliar with the man, he was an Australian inventor, photographer and aviation and photography pioneer, responsible for developing and promoting an early colour film process, and largely responsible for the development of photographic reconnaissance before and during the Second World War. Cotton was recruited by Fred Winterbotham (then of MI6) to undertake clandestine aerial photography of the German military prior to the outbreak of war in Europe. Sidney had an amazing career and was friend of Ian Fleming the creator of James Bond. Its rumoured that some of Ian’s work was modelled on Sidney’s work as a spy. 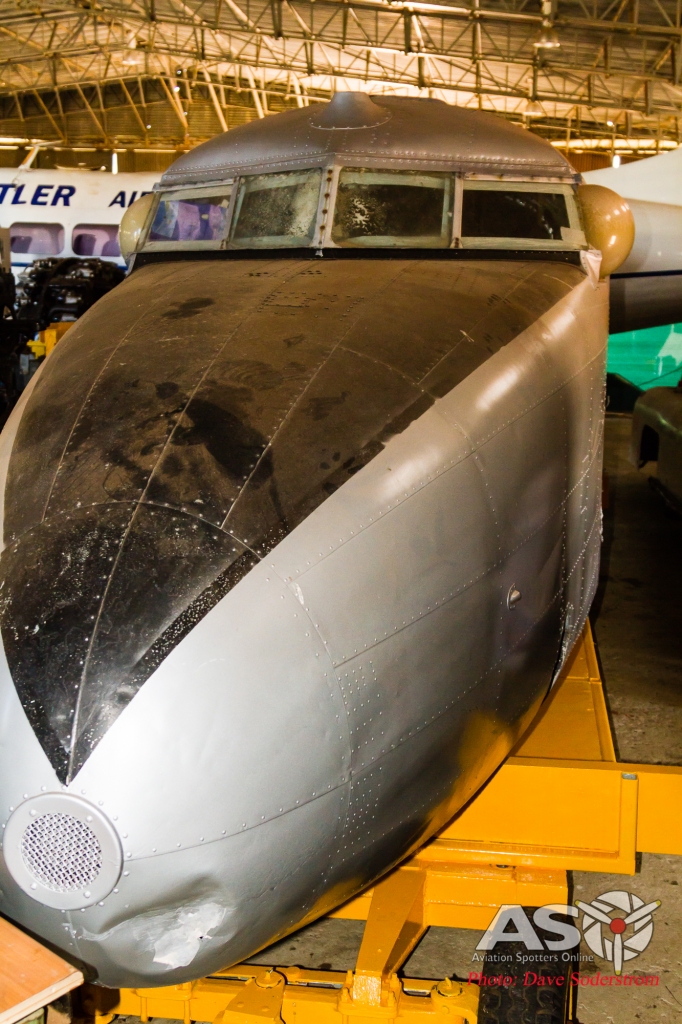 The aircraft had been part of the Melbourne Museum collection and has now passed on ownership of the airframe to HARS. There is a restoration currently under way on the airframe, with local school kids interested in learning aviation skills coming to work on and restore the airframe to display standards.

A common sight in the skies around Australia through to the 1980’s was the De Havilland Heron. Many were operated by various airlines. HARS Parkes have VH-NJI which is painted as VH-AHB in a Butler Air Transport scheme. This airframe came to Australia in 1991 to operate as part of the ironically named Heron Airlines based in Bankstown. Its flying career was short lived and was withdrawn from service in 1995. Prior to its Australian service it had flown with several operators including, Devlet Hava Yollari in Turkey, Royalair in Canada and Fiji Airways to name a few. 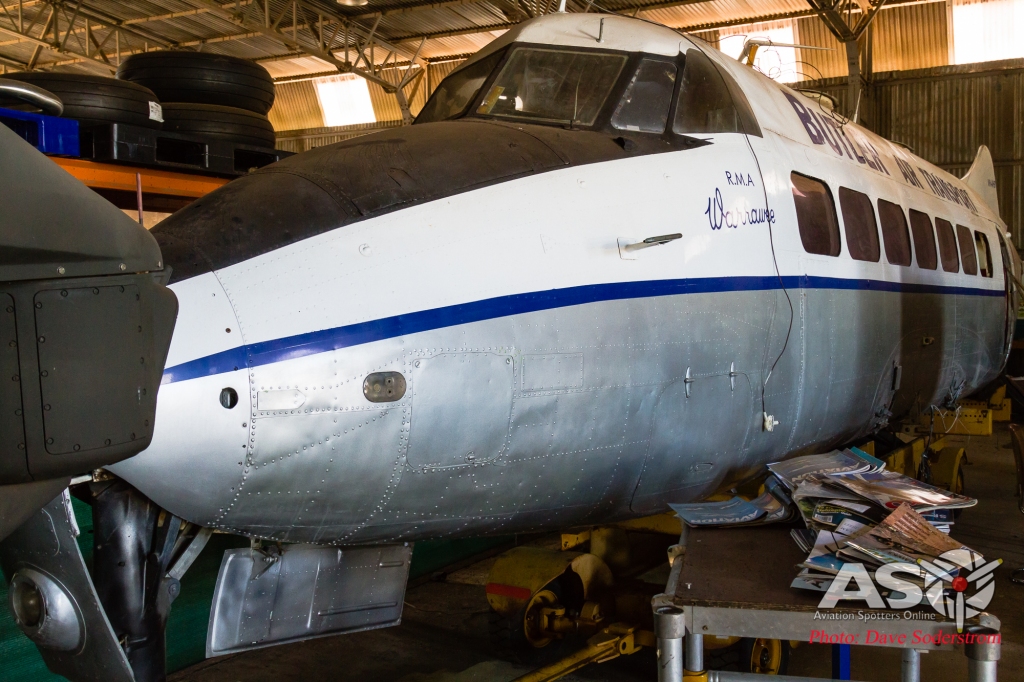 It just wouldn’t be a museum with out an example of the Harvard/Texan on display. HARS Parkes have an active restoration under way. The fuselage of ex RAAF Museum Harvard NZ1060 which flew as VH-SFY marked as NZ934. This airframe suffered serious damage in 2004 when it was ground looped on landing following engine failure at West Sale. The aircraft is slowly being rebuilt and with enough money and resources it yet may fly again. 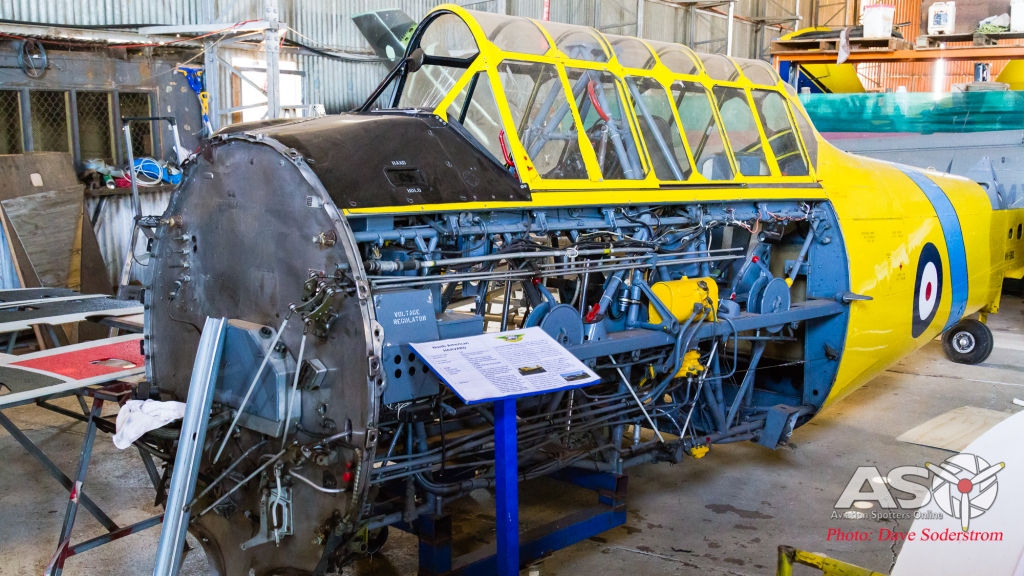 HARS has one of four Cobra Gunships on display in Australia currently on display in Australia. Of the four, HARS has an example at both facilities, whilst the Darwin Av Museum and Vietnam Veterans Museum located at Phillip island in Victoria have examples displayed. On display is 76-22592 an AH-1P variant. The Cobra was never operated or flown by any ADF service however they came very close. In December 1970 the AH-1G Huey Cobra was selected to become part of 8 Squadron. Eleven were ordered and allocated the A16 prefix. Sadly the order was cancelled in 1971, forcing the RAAF and Army to soldier on with UH-H Hueys configured as Bushrangers as was developed in the Vietnam War.  The Cobra on display is very complete, with most systems intact,making it an almost complete airframe. After its service with the United States Army it was brought to Australia with the intention of getting one of the airframes airworthy which sadly didn’t eventuate and plans to do so are now on hold. 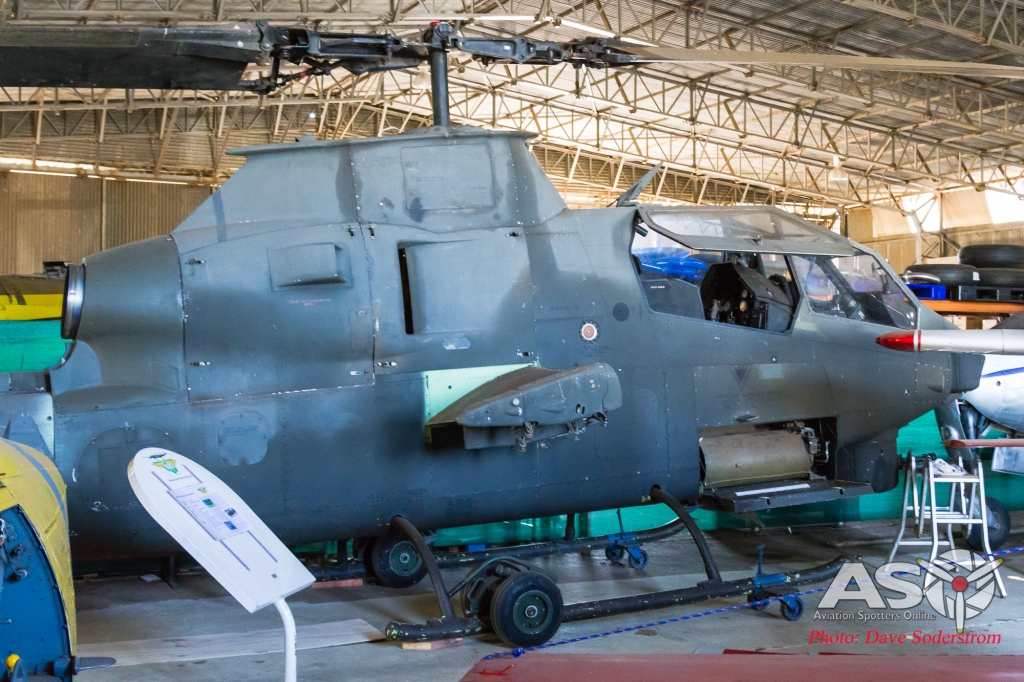 Next on display is the Australian designed and built Government Aircraft Factory Jindivink. A92-22 is one of the early Mk2 versions. Powered by a Rolls Royce Viper engine producing 1,640lb of thrust the Jindivink was a success for GAF who sold them to many defence forces around the World. Britain, US Navy and Sweden were among the users of the type. Some 182 were flown between the RAAF (161) and RAN (21) respectively. 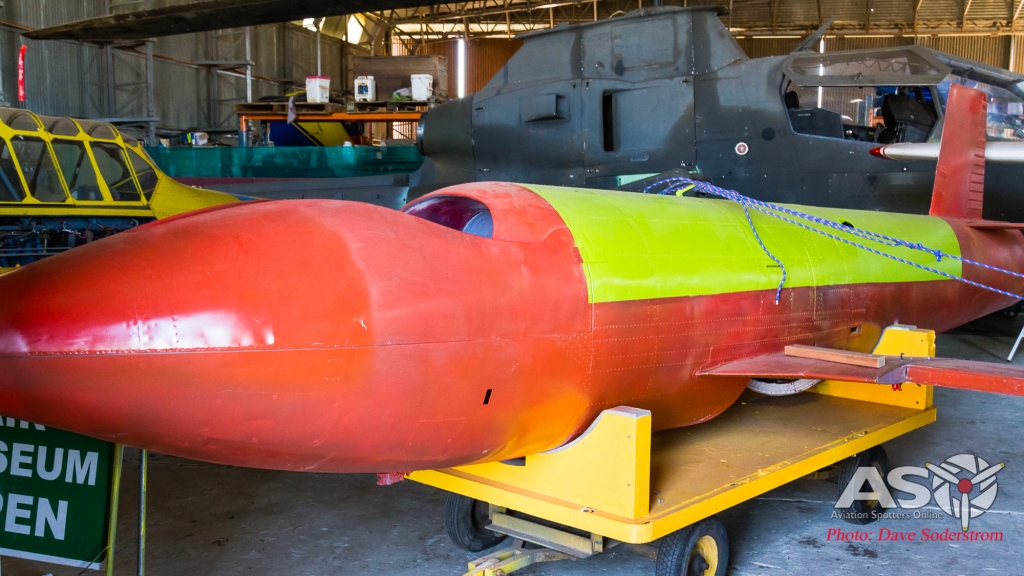 The final full airframe exhibit is a vintage Cessna 150E VH-DML. This 1964 vintage Cessna holds the distinction of being owned and flown by Australia’s first female Aboriginal pilot Virginia Wykes. Virginia got her pilot’s licence in 1982, and has owned the aircraft since 1991. Now part of the displays at Parkes its a fitting tribute to the owner, who lived not far away, by plane. The HARS team plan to look after the aircraft and keep it in ground running condition. As with most museum’s in Australia, they run on the smell of an oily rag. Money is always tight and so is help. If you can spare a few hours a week or weekend and help at your local museum, they would love to host you. You’ll be trained and guided in all sorts of work.

Aviation Spotters Online again wishes to thanks the HARS Parkes crew especially Dave my guide for the tour and also the laughs and jokes. I’ll be back soon and look forward to updating you all on the works.