In this the first of our Australian International Air Show articles we focus on an aircraft type that has previously visited the Australian International Air Show. The Airbus Defence and Space Military aircraft, the A400M Atlas. It was again part of the line up to be displayed among the other international aircraft on the flight line at this years event. The Royal Malaysian Air Force and Airbus Industries not only flew the Atlas to Avalon, but it was demonstrated to invited guests during the event.

Airbus are keen to see more Air Forces in the Asia-Pacific region replace legacy types like the Lockheed C-130, and Transal C-160 with the A400M. 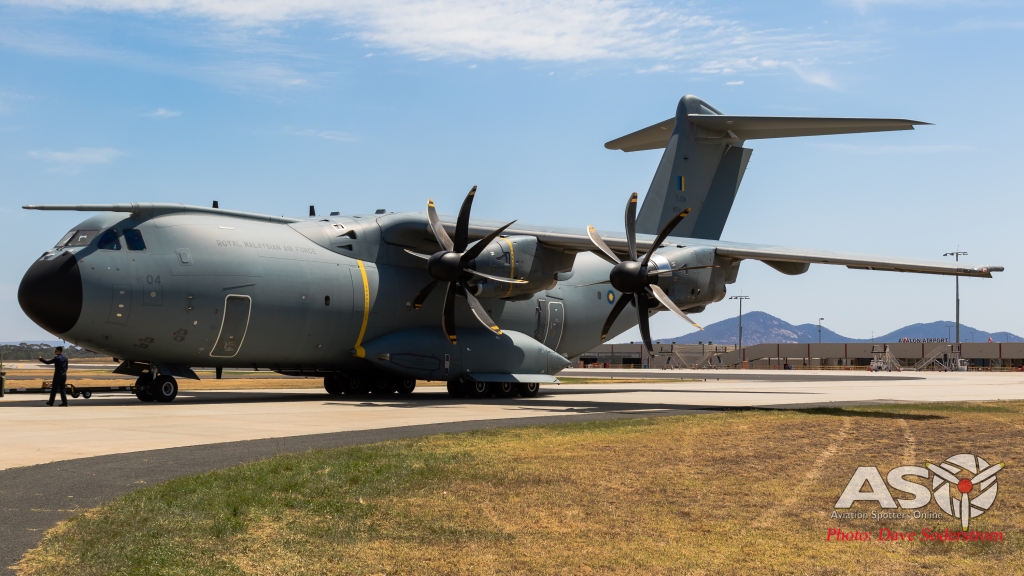 Positioning the A400M after a demonstration flight. 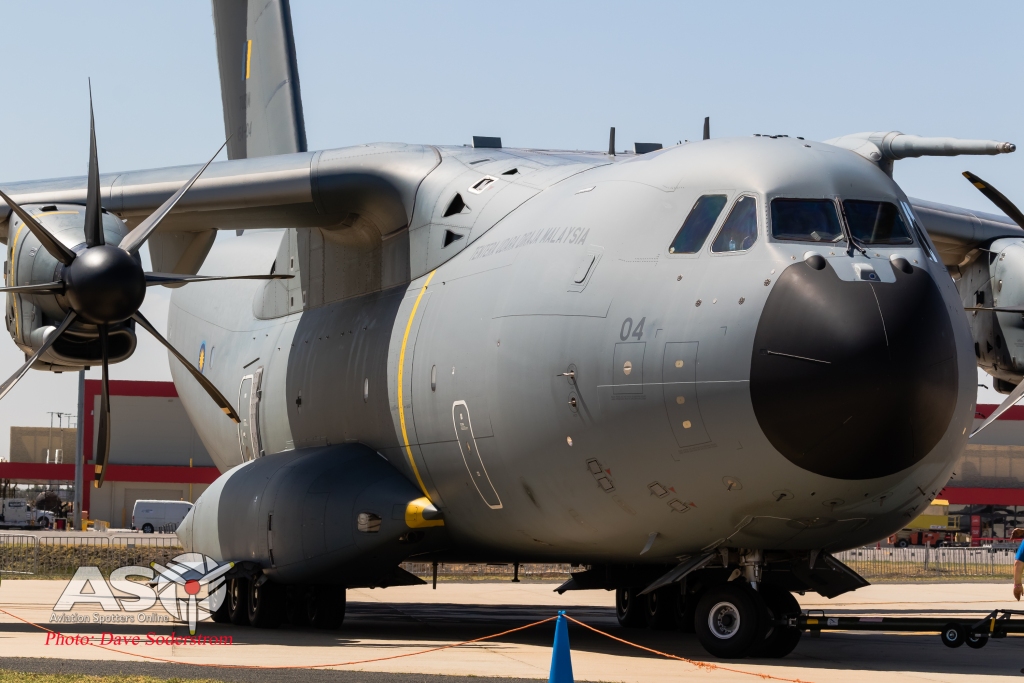 The type was launched in 2003 to response to the future airlifter needs of several European nations. France, Germany, Italy, Spain, the United Kingdom, Turkey, Belgium, and Luxembourg had a need to replace older transport aircraft, such as the Transall C-160 and the Lockheed C-130 Hercules.

All the major assemblies built at the company’s other facilities across Europe, are brought to the Seville facility by Airbus Beluga transporters, for the final assembly. The type first flew on 17 December 2008, it was originally planned to fly during the first quarter of 2008. This was postponed due to the well documented programme delays, schedule adjustments and financial pressures.

While development and cost overruns are common place with aircraft development the program was close to being terminated. In 2009, Airbus stated that the programme was expected to lose at least €2.4 billion and could not break even without sales outside NATO countries. Then in January 2010, Airbus again repeated that the A400M may be scrapped, costing Airbus €5.7 billion unless €5.3 billion was added by partner governments.

It was November 2010, when the governments of Belgium, Britain, France, Germany, Luxembourg, Spain and Turkey finalised the contract and agreed to lend Airbus Military €1.5 billion. The programme was then at least three years behind schedule. The RAF reduced its order from 25 to 22 aircraft and German Luftwaffe from 60 to 53, decreasing the total order from 180 to 170.

To date some 174 aircraft have been ordered with Airbus keen to sell the aircraft to other operators including the Royal New Zealand Air Force who are considering the type to replace their 1965 delivered Lockheed C-130H Hercules. 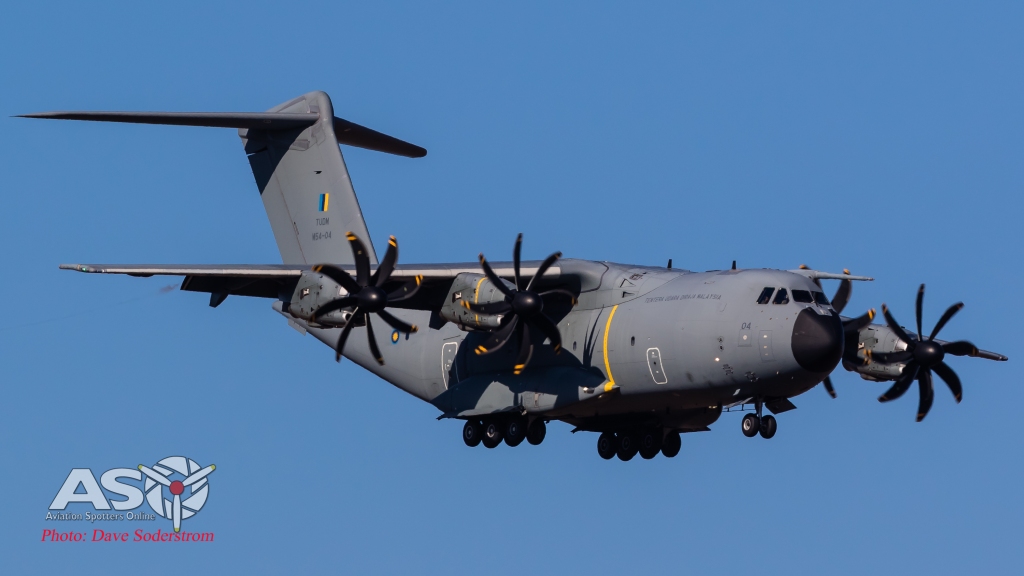 Arriving at Avalon Airport ahead of the airshow was, RMAF M54-04 was previously deployed along with RMAF F/A-18 Hornets to Pitch Black 2018. 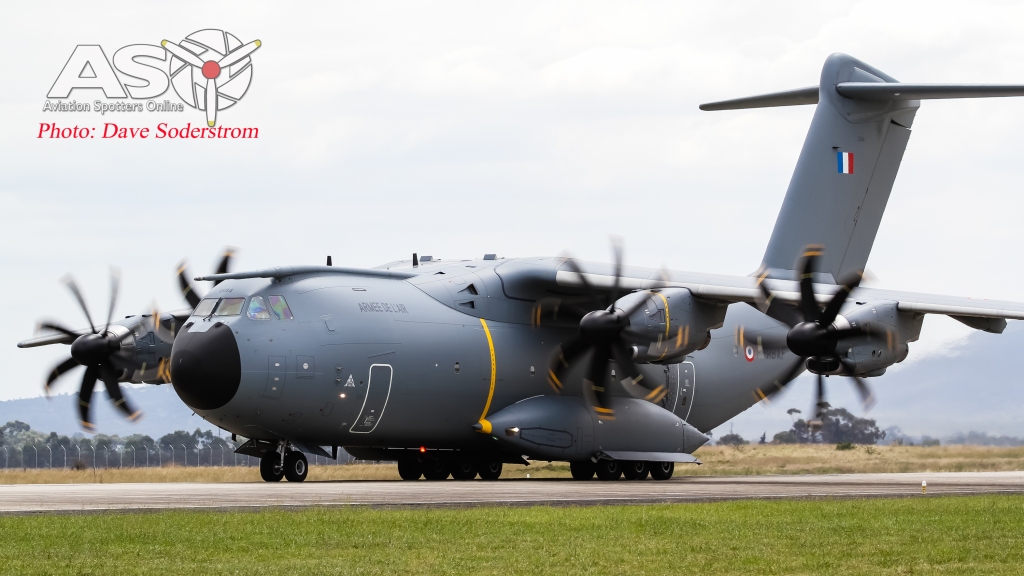 Aviation Spotters Online was invited by Airbus and the RMAF (Tentera Udara Diraja Malaysia (TUDM) to experience and look at the Atlas in detail during the Australian International Airshow 2019.

It was parked near some of it’s air lifting counterparts on the hard standing at the airshow which included, the Lockheed C-130H and J models, Boeing C-17A, Kawasaki C-2A. The A400M casts a large shadow where based on size alone looks like a perfect fit among the mix. The huge eight bladed Ratier-Figeac FH385 and FH386 variable pitch tractor propellers with feathering and reversing capability are 5.3 meters in diameter. Coupled to the four Europrop TP400-D6 turboprop, 8,200 kW which produce some 11,000 horsepower each, gives the A400M a cruise speed of 781 km/h at 31,000 feet. The eight bladed Ratier-Figeac FH385 and FH386 variable pitch tractor propellers, churn away as we climb out over Geelong 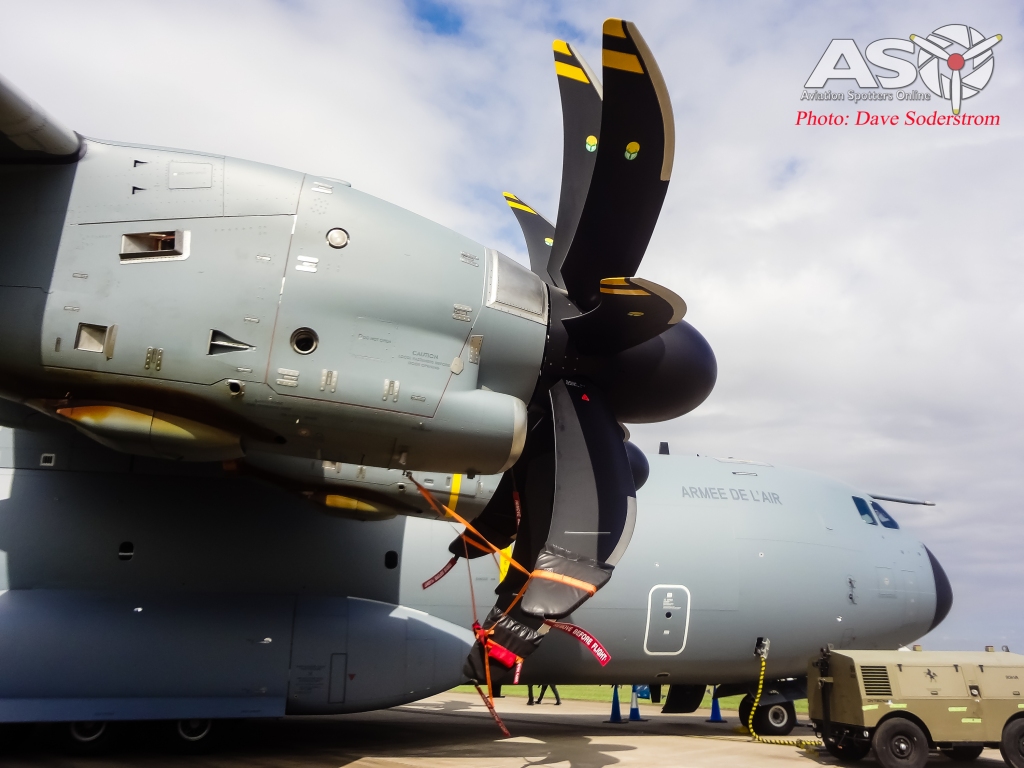 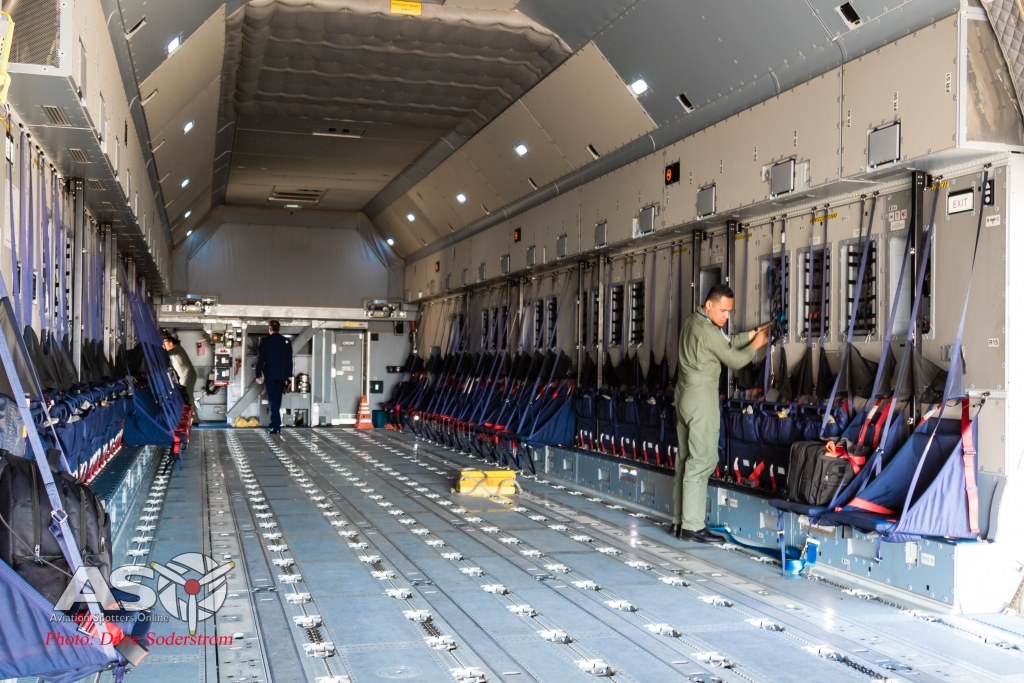 The RMAF crew prepare the cabin for the media flight.

With a maximum payload of up to 37 tonnes (81 600 lb) and a volume of 340 m3(12,000 ft3), the A400M can carry numerous pieces of outsize cargo. It is not limited to vehicles and helicopters that are too large or too heavy for previous generation tactical airlifters, for example, a NH90 or a CH-47 Chinook helicopter, or a heavy infantry fighting vehicle. It can also carry a single large truck, rescue boat, excavators or mobile cranes needed to assist in disaster relief.

Airbus has designed the A400m to accommodate 116 fully equipped troops or paratroops, seated in four longitudinal rows. Broken down this equates to: An Atlas cockpit is based on the layout and design of the civilian A380 passenger liner. The full glass cockpit which features four large glass displays are combined with systems designed to reduce the workload in the flight deck. A HUD or Heads Up Display is a prominent feature in forward vision from both the right hand and left hand seats. Other systems like a T-TAD (Tactical Terrain Awareness Display), ECAM (Electrical Centralised Aircraft Monitoring) and Fly by Wire controls all aim to reduce pilot workload during its varying mission suites.

The Atlas was designed to be a dual-role transport and tanker aircraft. A standard A400M has much of the equipment and software provisions for 2-point air-to-air refuelling operations already installed.  Any A400M can be rapidly reconfigured to become a tactical 2-point tanker able to refuel probe-equipped receiver aircraft. Having a fuel capacity of some 63,500 litres (50,800 kg) which can be even further increased with additional cargo hold tanks.

The aircraft uses Cobham designed 908E refuelling pods which are mounted on the external hard points out board of the engines. A further 808E Hose Drum Unit can be installed in the aircraft’s fuselage. The A400M loadmaster sits underneath the main cockpit. The station has monitors to access the cameras feeding information from around the aircraft to the crew member. 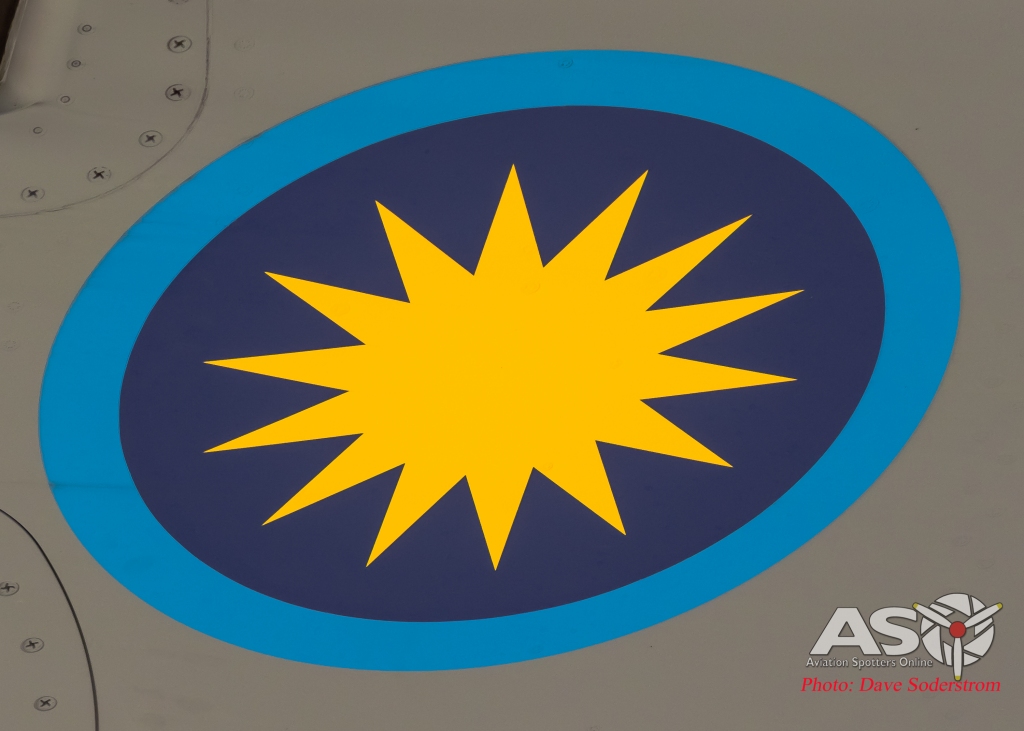 The Royal Malaysian Air Force’s 22 Sqn, is the services sole operating squadron of the Airbus A400M. Based at  Subang Air Force Base which was Kuala Lumpur’s main airport from 1965 to 1998. This was before the Kuala Lumpur International Airport in Sepang was opened. The motto of the squadron is “Gagah Berani or The Strong and The Bold, which officially stood up in 2015. 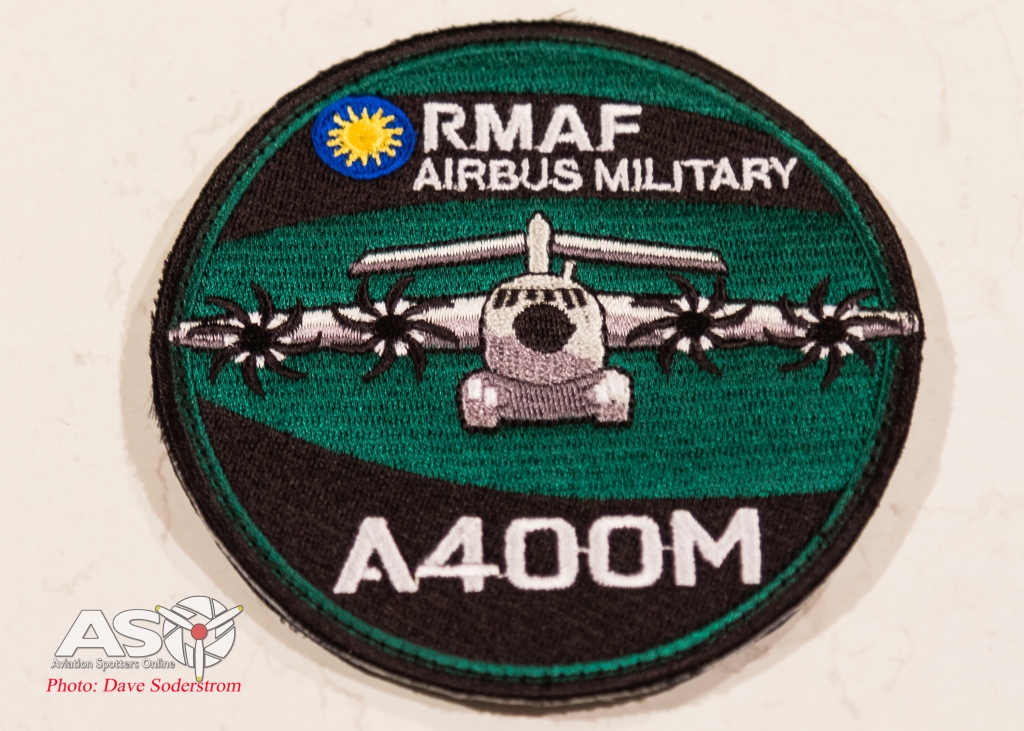 On 8 December 2005, four Airbus Military A400M aircraft were ordered to enhance the air force’s airlift capability. By March 2017 all Malaysian A400Ms had been delivered to the squadron. Climbing out of Avalon. The power from the four Europrop TP400-D6 turboprops is huge. 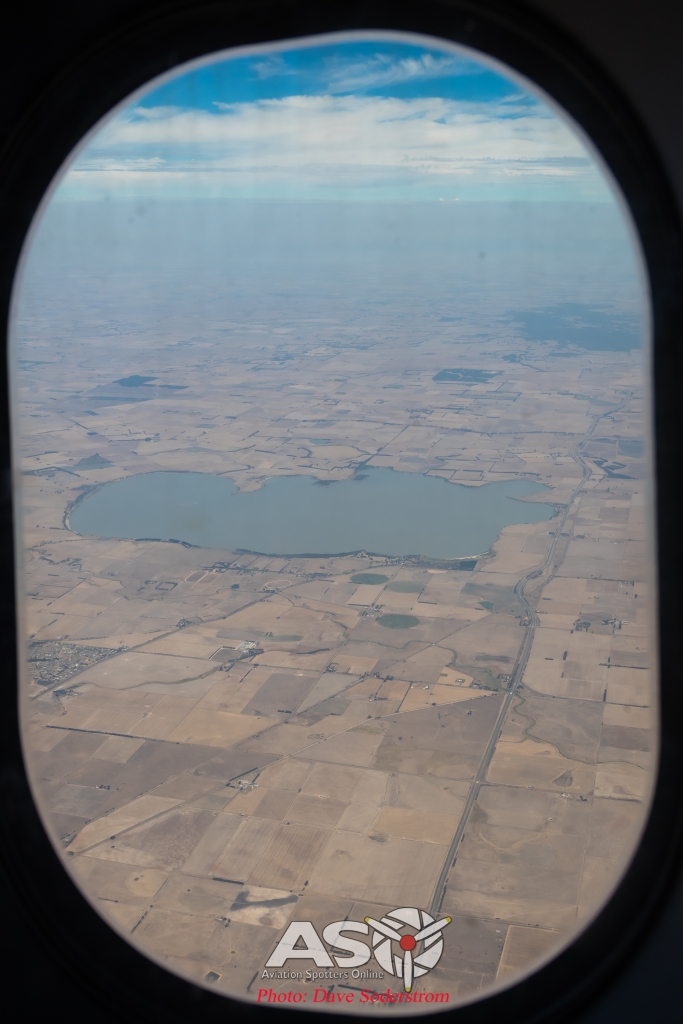 Taking in the vies from the cockpit. 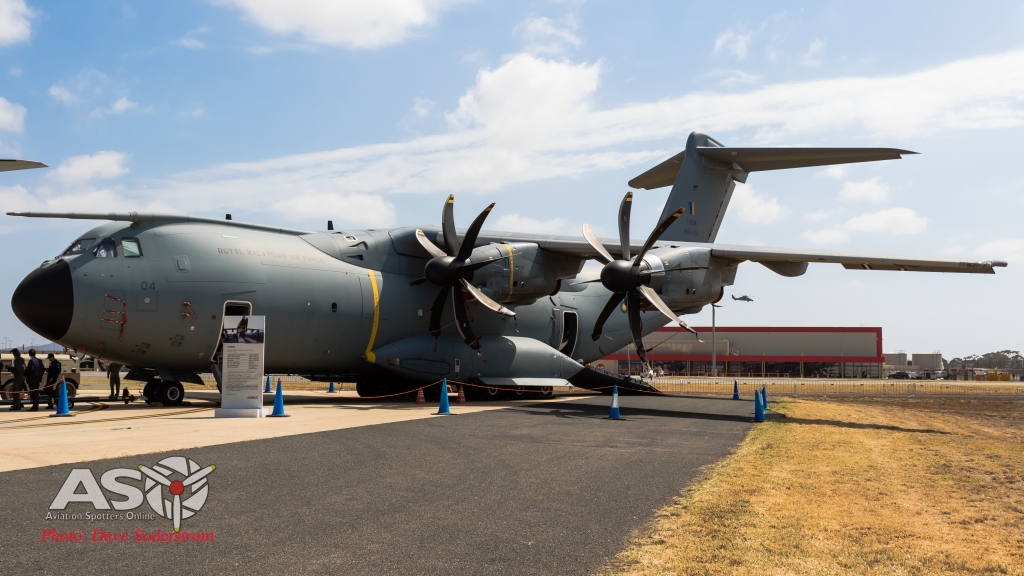 The RMAF did an amazing job presenting the aircraft to the public.

Humanitarian efforts with the A400M

In October 2018 an earthquake and tsunami in Palu Indonesia, saw the Royal Malaysian Air Force and Airbus Foundation working together to support humanitarian efforts. The deployment of a single A400M was to aid the distribution of emergency supplies to the city. It arrived at Jakarta’s Halim Air Base on 4 October, to support the devastated city.

Specialised cargo which would be a first of kind transport for the RMAF, included fuel trucks and excavators. Other supplies like   food, drinks, clothes, and medical supplies were brought in on subsequent flights also.

Major Hasan, who is a RMAF A400M Captain and also the Commander of Operations, took time out to speak with the assembled media about the aircraft, in the Air Force’s service.

The Major noted that the A400M has a quicker pre-flight preparation due to the aircraft’s on-board flight computer. It also enables a quicker turn around when the aircraft is on the ground.

It is a truly amazing aircraft with fantastic capabilities, we hope to see the type in Asia Pacific region in other air arms markings soon.

Aviation Spotters Online wishes to thank the crew of  The Royal Malaysian Air Force (RMAF Malay Tentera Udara Diraja Malaysia (TUDM) and Airbus Defence and Space for the invitation to experience the Airbus A400M Atlas during the Australian International AirShow 2019.

The second media event arranged at RAAF Base Tindal, 350 km south of Darwin, during the Royal Air Force’s Exercise Diamond Storm, was an airside visit to capture some Red Air forces taxiing out and departing for the exercise airspace. To have this level of close access is something that[…]

During the 2015 Australian International Airshow, held at Avalon Airport near Geelong Victoria, many RAAF asset’s where on display on the ground and in the air, and none impressed the punter’s more than the RAAF 6 Squadron F/A-18F Super Hornet’s, with their spectacular take-off sequence’s and ground attack demonstrations and[…]

Here is a selection of images from the ASO team on site at Avalon. Hope you enjoy them.