Retiring ‘The Spirit of Great Britain’

(For part 2 of this article see here.)

The story of the Vulcan is long and complex and has been told many times by people who have lived it.(I’m not one of those … but Ill have a go anyway) A story which began with hand sketches of an aircraft in the 1940’s at a time when engineering and industry where being used to rebuild nations. From the fires of World War Two Great Britain emerged into the light of the industrious 50’s designing and building many home grown classics on many fronts. Born to meet the need of an evolving nuclear age and Cold War, one of the most recognisable shapes that emerged from that period rolled out of Avro’s Woodford Aerodrome. The Vulcan was designed as a nuclear counter strike platform. The role seems sinister but in simple terms it is a statement that says strike us and we will strike you back. It was part of the delicate balancing act that was the Cold War. 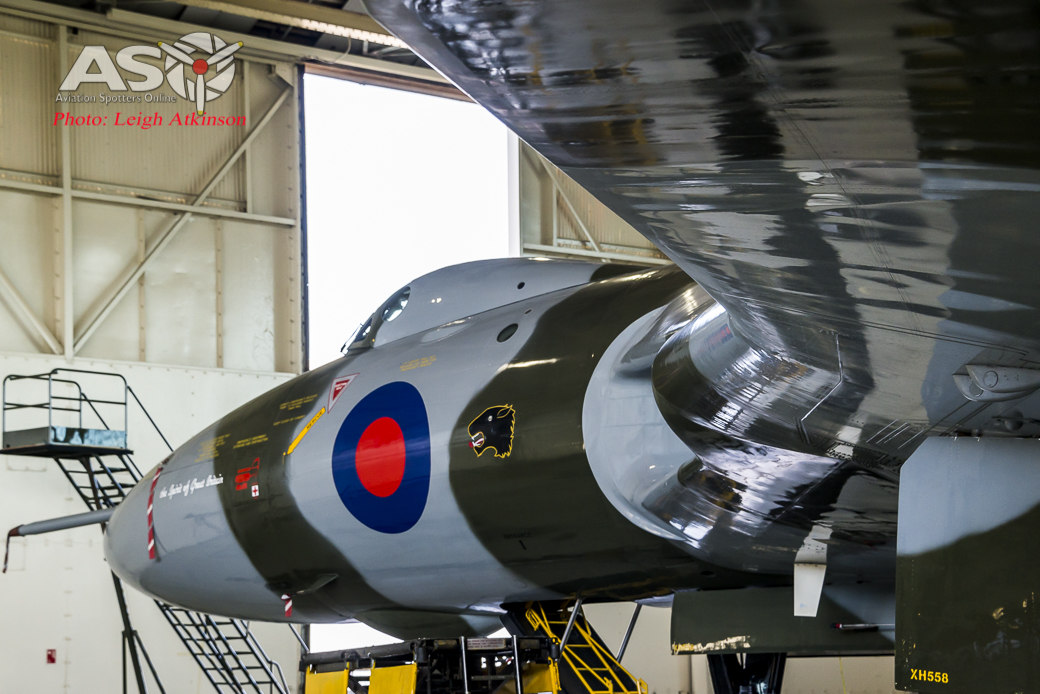 Following numerous engine and airframe developments in the 50’s it was Vulcan XH-558 that was the first of the B2 models delivered to the RAF on the 1st July 1960. In 1973 XH-558 was converted to the Maritime Recognisance configuration and in 82 was converted to aerial refuelling roll. 1985 saw XH-558 reconfigured as a B2 and from 1985 to 1992 she served as the RAF’s display aircraft.

In 1993 following XH-558’s retirement from the RAF display team her arrival at Bruntingthorpe was seen as the end of an era. The end of the types aerial operations and a closure to that page of history. Having been sold to the Walton family company who operate Cold War Jets, 558 was at least going to be able to fast taxi with those Olympus engines having the opportunity to propel her down the runway.

In the late 90’s a plan was hatched that a Vulcan could once more grace the skies. It took the hard work of a lot of dedicated people to jump through the hoops required to return a 40 year old jet bomber to the sky. Technical issues, spares and money were only part of the challenge. But in an unbelievable feat, the require components and sufficient funds were raised, skilled people were sourced and 8 years and £6,500,000 later she was again thrilling the crowds and bringing back a flood of memories for many Brits.

As the years of display service continued it became evident that keeping the Vulcan flying indefinitely was not an option. There appears to be a range of factors as opposed to one single issue that will finally ground her. An aging air frame, limited spare engines and a disappearing skill set to maintain them all bought about the decision that 2015 would be her final year.

Many have suggested that she could be kept flying and with a bottomless war chest of cash anything is possible. But funds are limited and skills are dying out and the airframe has now flown 10% more hours than any other airframe of its type. There is only really one complete spare engine capable of sustaining a display. £6,500,000 to get her in the air and over £2,000,000 per year to keep her there. Hell I’d love to see her flying forever but this substantial piece of funding has come from passionate enthusiastic people from Britain and all over the world. No government funding, just what ever income the Trust is able to draw from the community. So that’s somewhere in excess of £22,500,000 spent keeping this magnificent icon of British engineering flying for the last eight years. I don’t know the figures but I get the feeling that any plans to keep her flying would start making that figure look small.

So where to from here?

Surely its simple. plan a season … fly her till the end and shut her down. Who could have foreseen that the passion of the British people for this aircraft could be putting her last flights at risk? On the 3rd of October the Vulcan to the sky trust web and Facebook pages carried a very stern warning. If crowds flock to Doncaster to see her take off and land … and those crowds cause issues with the safe operation of Doncaster as an international airport then the Vulcan may not fly.

Currently after todays final displays (to sold out crowds at Gaydon and Old Warden) there are only two more announced flights, the 10th and 11th of October for her farewell flights. Apparently her last farewell to the adoring and grateful people after who’s spirit she is named … The Spirit of Great Britain. Apparently her last flights because … no wait a minute … there is no drop dead date when 558 ceases to operate. The decision to ground her has been taken seemingly well in advance of any particular hard date that she cant fly after. So if she is still in an operational condition and the weather is kind surely she could fly a few more times if there is a little petrol money in the ashtray? Wishful thinking yes? Then I came across this response by the trust on their Facebook page to a question referring to her final flights on the 10/11th and it read “Not the final flight next weekend, hopefully. A few more weeks to go.”

Ill leave you to ponder that possibility …

For part 2 of this article see here.

It seems less than a year since the last event but Darwin Aviation Heritage Museum has again held it’s annual Open Cockpit Day on Sunday 14th May 2017. It is the one day each year where a selection of normally sealed display aircraft at the museum are opened for public access, not[…]

360Fly video onboard the Russian Roolettes

Now that ASO is live with the brand new 360Fly HD video camera we will start releasing a lot more video from onboard all the different aircraft we have had the camera in. So sit back and enjoy this new way of seeing a view that was not[…]

When the Chook comes to town.

This fire season, a return of the Boeing CH-47 Chinook has seen it working on fires in New South Wales and Victoria. The Chook returned to be operated by Helimax Aviation Inc, in conjunction with local Camden based operator United Aero Helicopters, under a non-contracted call as required arrangement. Helimax[…]