Every once in a while we all have one of those “is this really happening?” moments. Recently, finding myself sitting in the back of a Yak-52 at around 3000 feet, canopy open, buffeted by the slipstream, looking out at a P-51 Mustang and a bright orange Wolf Pitts S1-11X sitting just off our starboard wing, was one of those moments for me. 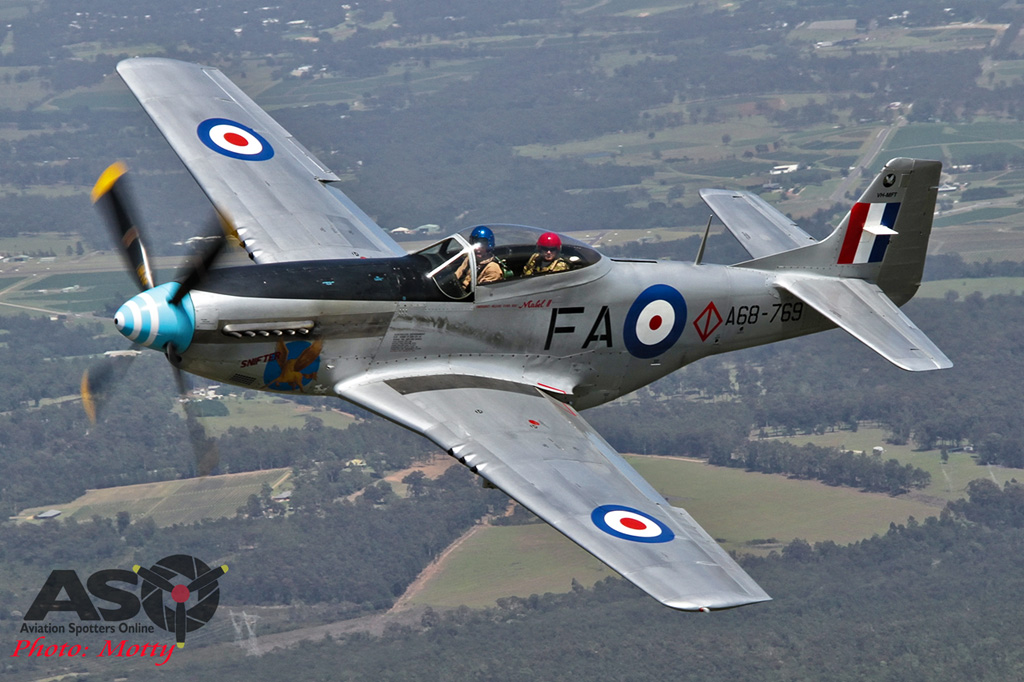 After discovering that, following its appearance at this year’s Warbirds Down-under at Temora, Mustang VH-MFT, operated by Mustang Flights Australia, was spending a few days at my local airfield at Maitland in NSW, before returning to Caboolture in Queensland, I was given the incredible opportunity to get a few minutes air time with this magnificent machine before it headed home.

Mustang Flights Australia operates VH-MFT to offer people the chance of a lifetime to fly in this iconic warbird on paid adventure flights and as, during the airframe’s restoration, the opportunity was also taken to convert it to dual control configuration, it may even be possible for some patrons to take the controls themselves. 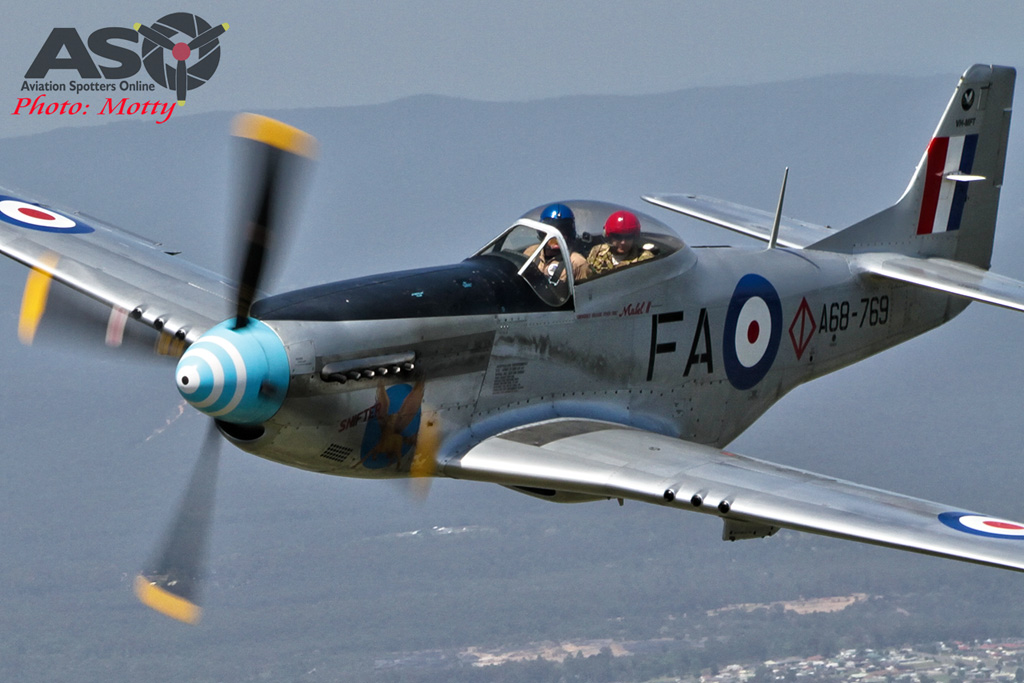 Built in Australia in 1948 as a CAC-18 Mk.21, VH-MFT’s actual RAAF serial is A68-110 but it is painted up to represent P-51D A68-769 while it was the personal mount of the Commanding Officer of 82 Sqn RAAF whilst the unit was based in Japan as part of the Commonwealth Occupation Forces following WWII and sports some beautiful (and unusual for RAAF Mustangs) nose art of a winged horse on a blue background, with a small cartoon dog and the name “Snifter”. After its time in Japan, the real A68-769 later went on to see combat with 77 Sqn during their operations in the Korean War. 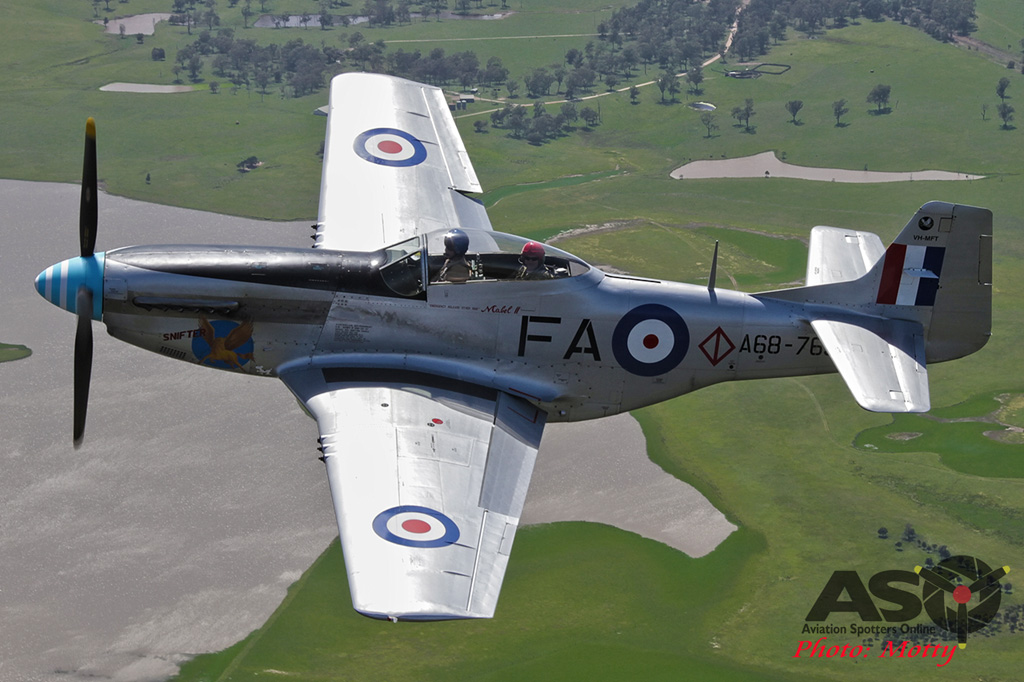 As if the Mustang wasn’t awesome enough, local aerobatic pilot, Paul Bennet of Paul Bennet Airshows, asked if I would be interested in taking some shots of his new Wolf Pitts S1-11X at the same time. Uuumm, yeah, ok. 😉 Paul and his team are well known for their performances at airshows around Australia and, increasingly, overseas as well with an impressive stable of aircraft which includes such various types as a Tigermoth, Stinson L-5, Yak-52, T-28 Trojan, Wirraway and Grumman Avenger on the warbird side and a growing number of various Pitts Specials in the aerobatic fleet. 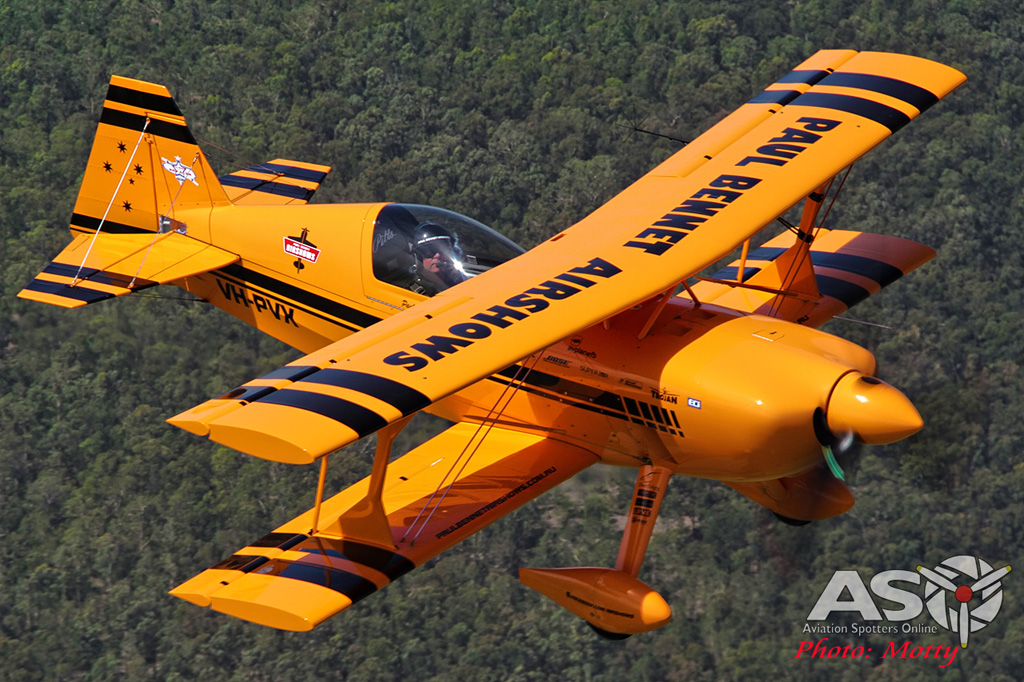 It was the increasing commitment to the team’s overseas appearances in China and South Korea, and the time required to disassemble, ship and reassemble the aircraft between the various countries and back home again, that led Paul to purchase his latest example of the iconic aerobatic biplane in order to better fulfil his commitments back here in Australia whilst the other Pitts were sill overseas. You can see more about the purchase of this machine and its part in the team’s epic journey to New Guinea in our previous article; Warbirds return to New Guinea. 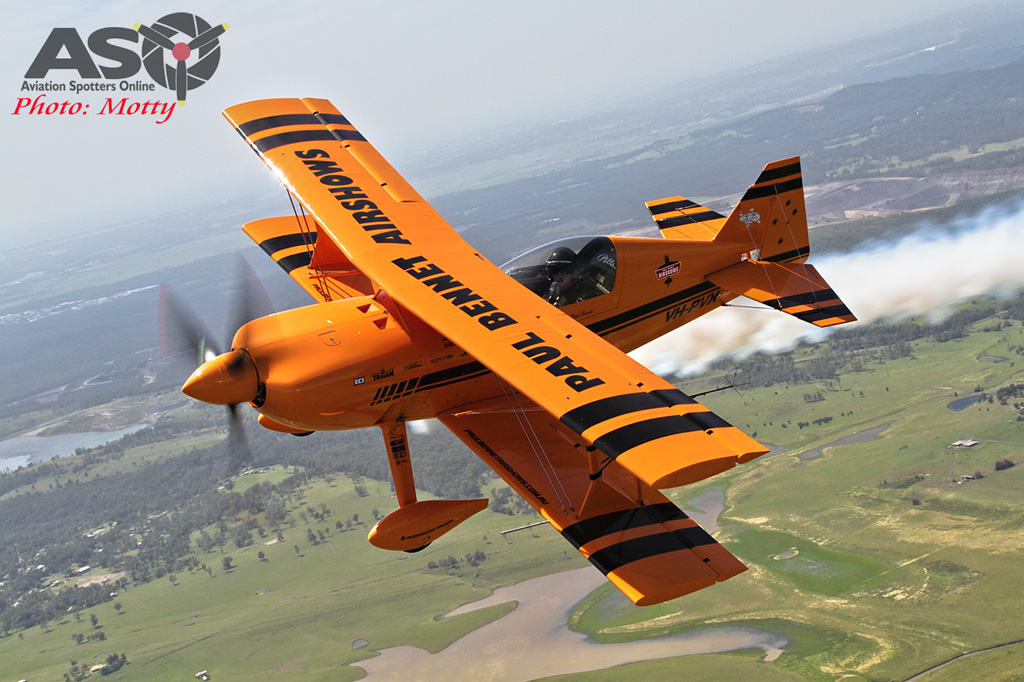 The day dawned clear (thankfully) but was forecast to be a hot one so I headed out to the field early to ensure plenty of time for briefings and any other arrangements that might be needed. The Mustang had one flight for a lucky local patron before it would depart for Coffs Harbour which was when I would have my brief meeting with her. I took the opportunity of the first flight of the day to head across to the nearby field at Luskintyre to get some shots as the Mustang performed a couple of fly-pasts over there on its way back from the joyflight then returned once again to Maitland. 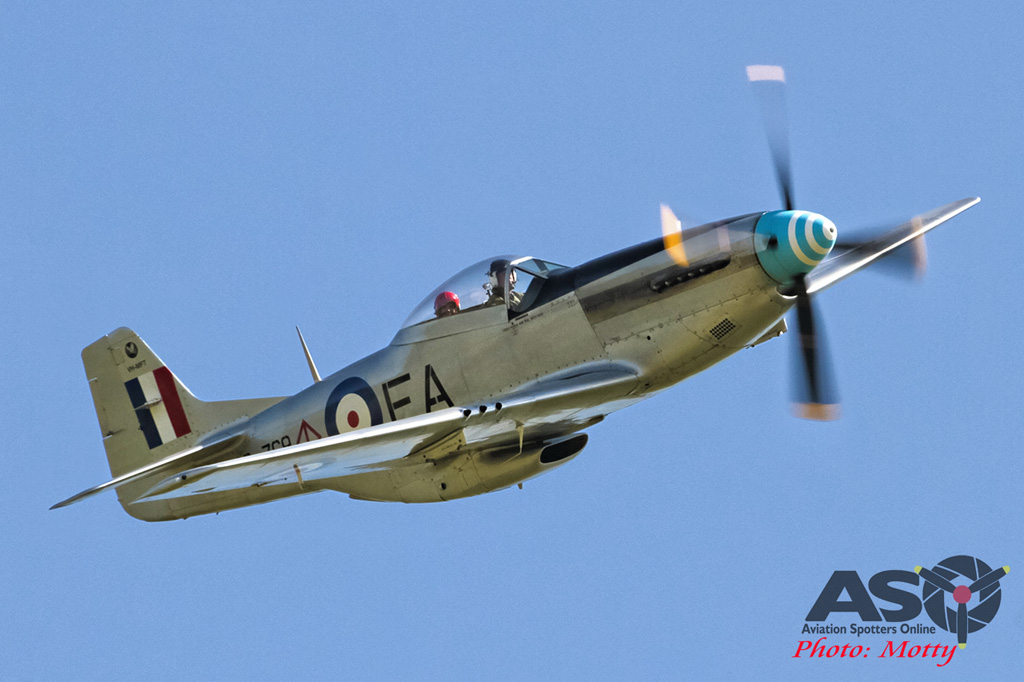 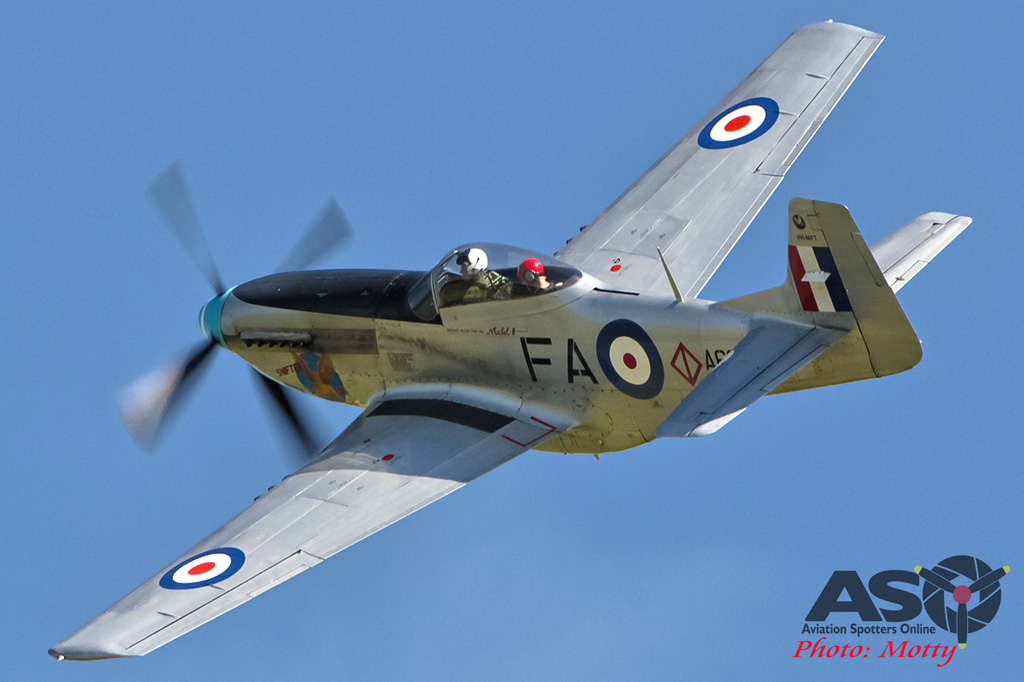 After a briefing with everyone involved, it was time to head out and strap in. The photo-ship was a Yak-52 flown by Glenn Graham from Aerohunter Warbird Adventure Flights, another of Paul Bennet’s ventures which offers people the chance to actually fly in some of the amazing warbirds that the team operates. Not that I’ve got a huge amount of experience at it, but I like the Yak for air-to-air as it’s possible to open the canopy in flight which provides an excellent view with nothing between the lens and the subject (although it is a tad breezy  😉  ). 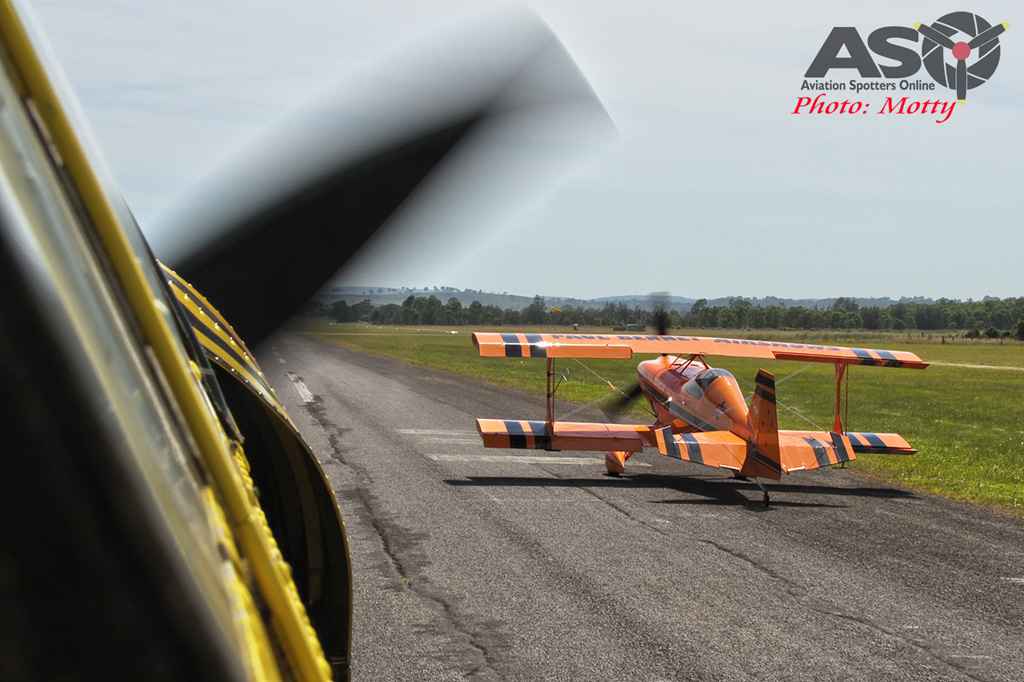 We departed early with Paul in his Pitts whilst the Mustang and its next passenger were prepared for the flight. As we made our way up to around 2,500 feet, Paul expertly placed the nimble Pitts in several positions for me to try and snap a few shots, including above us, inverted, in a mirror formation. Now that’s an unusual view of another aeroplane whilst airborne. 😉 We then headed back over the airfield to await the Mustang’s departure. 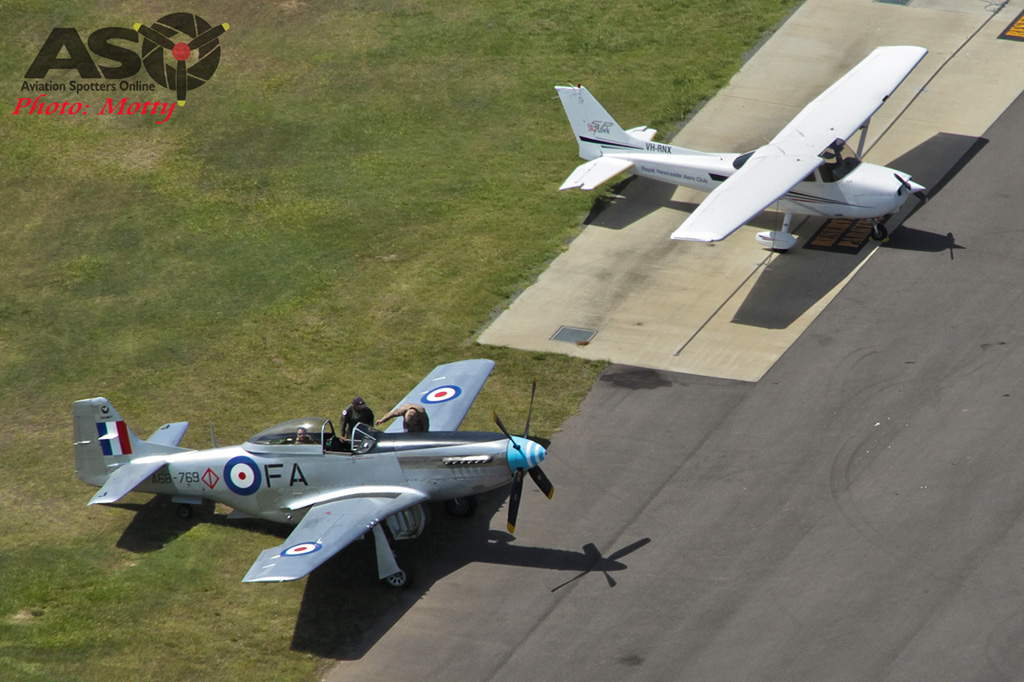 After taking off, the Mustang was quickly up at our altitude and joining up on our wing. I only had a few precious minutes with this magnificent machine before they would have to head north on their leg to Coffs Harbour so we made about three quarters of a wide orbit before Paul joined up on the Mustang’s wing for a couple of unique shots of the two, vastly different types together before the Mustang broke off and continued on its way. 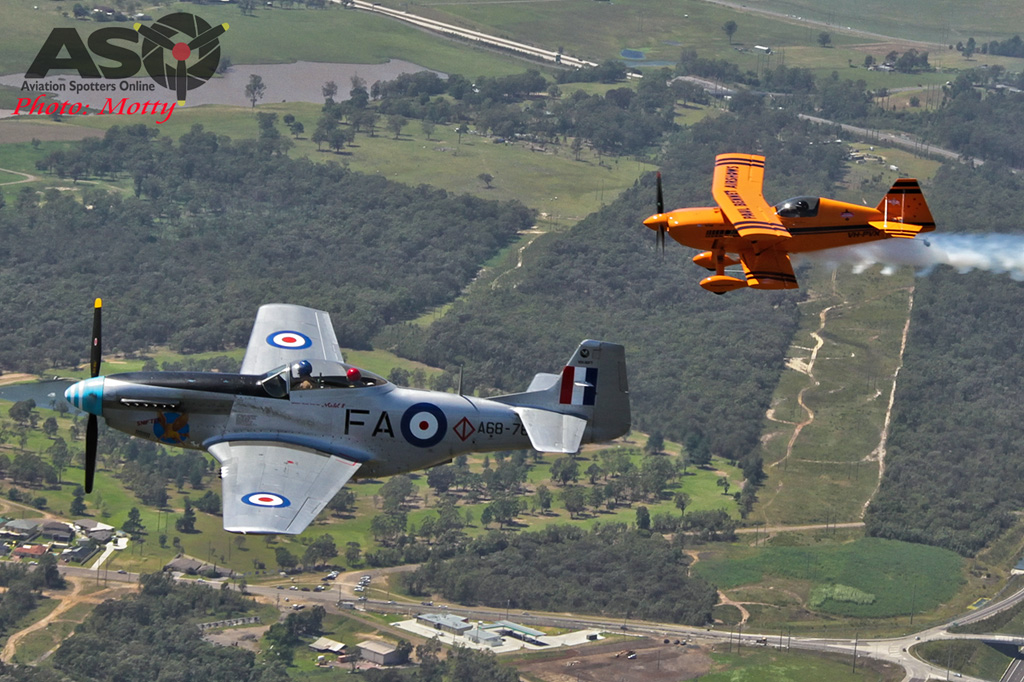 Unfortunately during opportunities like this, there’s usually so much going on and stuff to think about, checking that the camera settings are right, thinking about where to position the subject, is there a better background available to shoot against, how many shots have I got left etc. etc. that it’s possible to miss the sheer wonder of seeing such amazing aircraft up close in their natural element, but I hope that the images can, in some small way, help give a sense of what it’s like. My deepest thanks to Paul Bennet, Glenn Graham, Mark Hall, Roger Hendry and Geoff Kubanks for their time and for making this amazing experience possible.