The Royal Australian Air Force’s Diamond Storm and the Air Warfare Instructor’s Course normally includes a foreign component to the exercises. This has occured for decades now and 2019 was no exception.

This year the United States Air Force deployed two squadrons to RAAF Base Darwin to participate and train with the ADF in this exercise based out of RAAF Base Darwin in the Northern Territory. Firstly two B-52H’s from the 23d Bomb Squadron, 5th Bomb Wing, Minot AFB, Nth Dakota arrived from Guam where they are currently deployed as part of the U.S. Air Force’s Continuous Bomber Presence (CBP). For a seperate look at Iron Butterfly, one of the B52’s click HERE

The F-15C Eagle fighter contingent was represented by the 194th Expeditionary Fighter Squadron ‘California’ of 144th FW Fresno ANG Base, California. As with the RAAF, the Air National Guard also utilise aircraft from sister squadrons and this year deployed from the west coast of the United States with two of their own and six aircraft from the 122nd Fighter Squadron ‘JZ’ Louisiana, ‘Bayou Militia’ of 159th FW NAS New Orleans.

With some familiarisation flights and a work up in the week before Diamond Storm, the F-15’s soon became a familiar sight in the Darwin skies. The 194th ‘Griffins’ have only been flying the F-15C Eagle since converting from the F-16 Falcon in 2013 but they have deployed to Australia with notable Gulf War (Desert Storm) historical warbirds.

Eagle 85-0102 is a Desert Storm veteran with a Iraqi Air Force Mig-23 kill on 29th January 1991 flown by Captain David G ‘Logger’Rose. This was followed up by two Iraqi Air Force Su-22M kills about a week later on the 7th February when ‘Gulf Spirit’ was flown by Captain Anthony R Murphy. To recognise these kills, all three being with AIM-7 Sparrow missiles, the aircraft has three green stars below the cockpit.

The second F-15C, 84-0014, flown by Captain John T Donski of the 53rd Fighter Squadron, 36th FW, bagged a Su-22M on the 20th of March 1991 with an Aim-9M Sidewinder, however this kill was after the war was officialy over but a no fly zone had been declared. Again 84-0014 is adorned with a green star plus the City of Madera logo – a tradition of naming aircraft after cities located close the 144th Fighter Wing base at Fresno, California.

During the AWIC the RAAF Public Affairs Office made arrangements for ASO to visit to the flightline of the 194th Fighter Squadron and a talk with the Commanding Officer.

We meet Senior Master Sergeant Paz at their operations building who welcomes us and issues us hearing protection, as the flightline can be a noisy environment especially when they fire up the external powercart for systems checks before the day’s flying begins.

SMSgt Paz takes us out onto the flightline where the maintainers are performing before flight servicings. The first F-15C on the line is 81-0022, one of the two 194th jets they have flown to Darwin – “1022 is actually the spare for today so that if one of the jets today breaks, the pilot can shut down, jump out and go for the first spare. We will have to wait as they are still preparing 1022 and they’re going to start the ‘Dash 60’ (jet-turbine powered Auxiliary power cart).

After a few minutes the maintainers begin to move down the flightline pre-flighting each aircraft – checking all the navigation lights are serviceable, oil and hydraulic fluids are topped up, tyre pressures are correct, gauges and switch selections in the cockpit are correct and the ACES II ejection seat is ready (positioning the pilots harness). Not long after the maintainers move off with the ’60’,  the Commanding Officer of the 194th, arrives to brief us on the 194th’s deployment to Exercise Diamond Storm.

Lt. Col. Chris “Cliff” Ridlon has only been the squadron CO since June last year but explains a few details about the F-15C Eagle.

“The F-15C is a single seat, twin engine, twin tail air superiority fighter designed in the mid seventies to basically take advantage of and refine all the things of the F-4 to be a pure air-to-air fighter, high thrust to weight ratio and a low wing loading for a fighter. Our mission is to protect friendly aircraft from enemy forces or protect friendly areas whether it be United States or allied Air Forces.”

“These are configured with two external tanks each one carrying 600 gallons of fuel which can be jettisoned if we happen to engage in air-to-air combat. Our normal combat loadout is six AIM-120 (AMRAAM) radar guided, beyond visual range missiles and two AIM-9X heat seeking missiles. We have a M61 gun – a 20mm cannon that carries 940 rounds.’

Before Diamond Storm – “Were part of the Air National Guard (ANG) and were mobilised for this Theatre Security Package and we’re here to reassure our regional allies, to do training with our allies here in Australia and to maintain a prescence to keep peace and stability in the Pacific Command region. We’ve been an ally with Australia since WWI and we are here to build on that relationship.”

“Air National Guard is a bunch of part time forces that work together so as part of that we basically have a mix of aircraft from Louisiana  splitting up this mission a little bit and we have some actual folks from Louisiana with us here. We have about a hundred and sixty here, about fifteen pilots and a hundred and forty support folks and also some communications and security support.”

“We’re part of the 144th out of Fresno, California. The squadron is the 194th Expeditionary Fighter Squadron thats where all the folks belong to while we are here but we have folks from the 144th Aircraft Maintenance Squadron. Our maintainers do a wonderful job, very experience on this older aircraft in fixing them and allowing us to fly.’

“The focus here is training with Australia, we’ve actually flown with Australians a couple of times at Red Flag (Nellis Air Force Base) and in Alaska so it’s good to come here and be part of AWIC. We bring the air-to-air expertise and the other part is that the F-15 is really known for de-briefing really well. So we bring that expertise with some more senior guys to help out with their (AWIC candidates) course – kind of training along side of them – learning things from them and they’re learning stuff from us”

“We have been both Red and Blue Air – escorting and being both Defensive Counter of Offensive Counter Air. This airspace is absolutely phenomenal, a very large airspace away from the cities so it allows us to do some good high end training and has enough space for us to execute all our tactics. It is comparable to Red Flag airspace in Nevada”

Lt. Col. Ridlon poses for a number of photos in front of various squadron aircraft before departing to a last minute briefing with his pilots.

We move down the flightline and observe some 144th AMS maintainers preparing to jack aircraft 85-0102 for maintenance. They use three large 20t jacks to support 85-0102 off the ground for undercarraige retraction and extension cycle checks. The 34 year old ‘Killer Legacy’ had dumped fuel and taken the arrestor cable at Darwin the night before as a precautionary measure, and subsequently been towed back to the flightline for dayshift checks.

We are able to climb some stairs to look into the cockpit of 81-0022 – pretty much the standard 80’s design, but with an upgraded AN/APG radar and the BVR AIM-120 plus 9X Sidewinder, the F-15C Eagle is still a fighter to be reckoned with. Sadly the pilot’s name on this Fresno Eagle is that of Lt. Colonel Seth “Jethro” Nehring, a 194th Fighter Squadron exchange pilot who unfortunately died in a Ukranian Air Force Su-27UB Flanker crash back in October 2018.

As we walk back SMSgt Paz points out the Ground Support Equipment – tow motors, hydraulic rigs and power carts and says that “It’s all is brought in and out by the USAF Air Mobility Wing – C-17 ‘s and C-130’s…. plus our spares like wheels, avionics and stuff” We see the C-17A Globemaster III regularly in Darwin.

Again it has been a unique experience organised by Defence Media and the Public Affairs team in Darwin, this time to walk the flightline during a major exercise and speak with the CO and a senior maintenance co-ordinator of the 194th Expeditionary Fighter Squadron.  The F-15 has been deploying to Darwin exercises for four decades now and we look forward to even more Air National Guard units deploying to Darwin during any future integrated training opportunities that may present themselves. 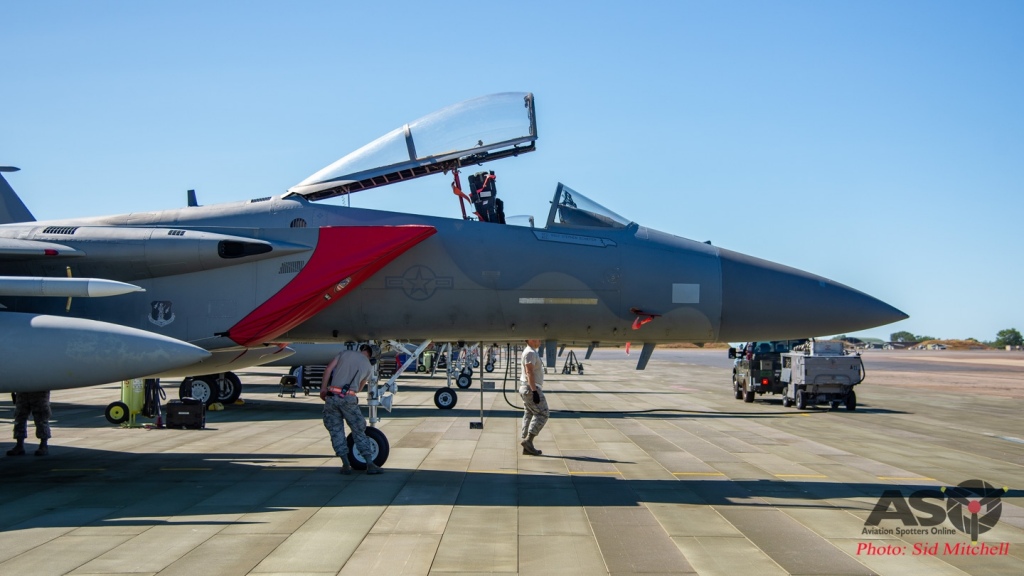 Given its been 5 years yesterday (3rd of December) since the Royal Australian Air Force retired the mighty F-111 it seems appropriate that we take a quick look back. Enjoy this great set of photos by our regular contributor Peter Chrismas. Check out the whole gallery of this dump and[…]

A significant date for the United States Air Force this week. September 18th 2016 marks the 69th anniversary of the largest Air Forces in the world. Formed as a separate branch of the United States Army on this date, the current U.S.A.F is  today a service which operates more than 5,137[…]

Friday 8th of December saw 3 Squadron, Royal Australian Air Force (RAAF) make a flypast over the city of Newcastle, Australia, followed by their home base of RAAF Williamtown, just north of Newcastle, in the shape of a giant number 3. 10 classic Hornets took part, along with a single[…]