As mentioned in my earlier article on my visit to the 51st FW at Osan, South Korea, in September of 2016 (see HERE), the local F-16 unit, the 36th FS, were preparing to deploy for an exercise at the time, so there weren’t too many of their aircraft to be seen during my stay. This was more than made up for though by the presence of the 157th Expeditionary FS from the South Carolina Air National Guard’s (ANG) 169th FW as part of the current Theater Security Package (TSP) hosted by the 51st FW at Osan at the time. 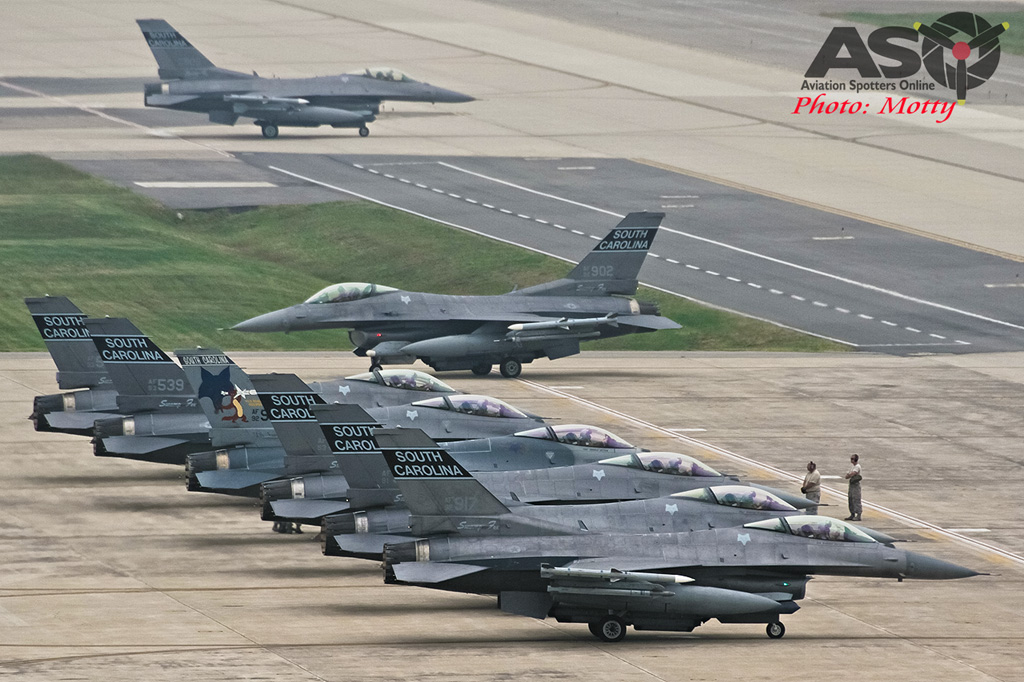 A Theater Security Package is an operation that sees State-side fighter, tanker, transport or other units of the UASF and ANG periodically rotated through regions of particular significance for between four to six months at a time, in an effort to provide their personnel with in-theater knowledge and experience through training with local forces (both US and Foreign) as well as bolstering the assets assigned to a particular area and presenting a demonstration of the US’s commitment to the support of those regions without the need to invest in the infrastructure that would be required for permanent units. 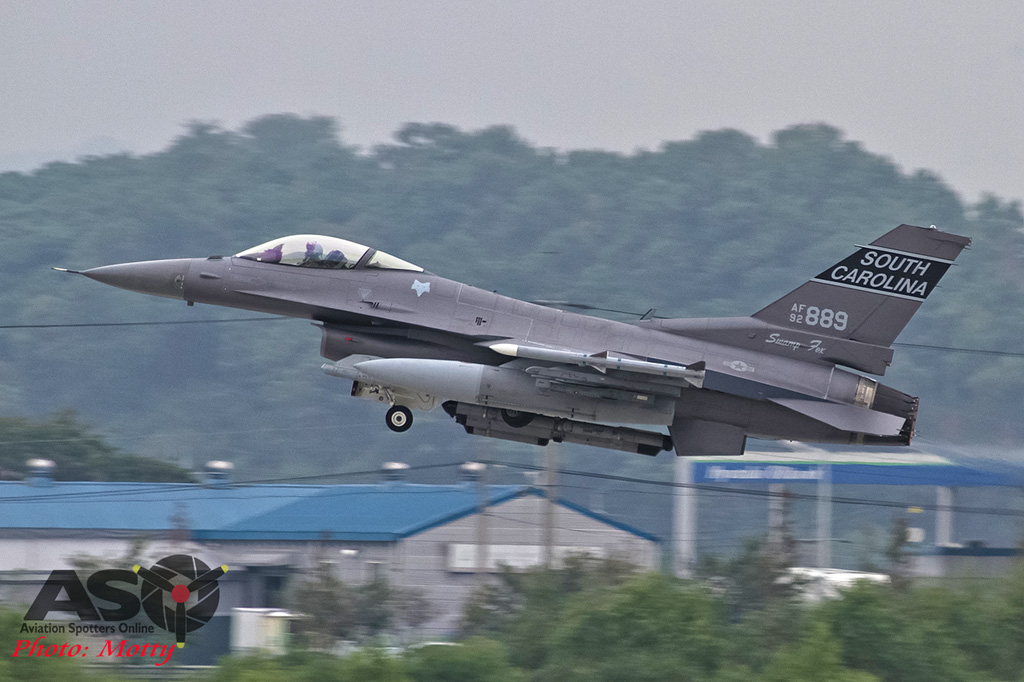 Whilst the USAF has only relatively recently begun sending units to Europe as part of this program, there have been many such deployments in the Pacific (and particularly South Korea) since 2004. These rotations also benefit the host units in that it allows them to train and maintain their ability to accept and support additional forces as this is another key requirement for the 51st FW in particular during times of increased tensions. 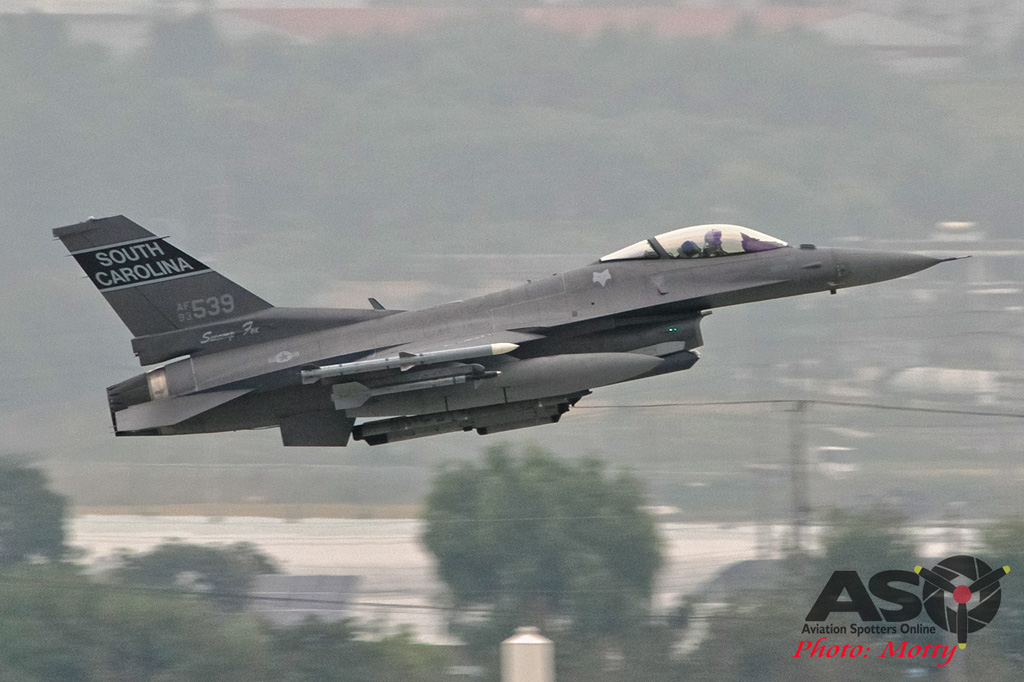 The 157th FS is the flying element of the 169th FW and traces its beginnings back to 1942 when it initially flew P-40 Warhawks in air defence of the mainland US before being deployed to Europe in 1943 where they flew long range bomber escort missions with P-47 Thunderbolts then P-51 Mustangs until the end of WWII. Following the War, in 1946, the former 350th FS was re-established as the 157th FS, Flying F-51 & RF-51 Mustangs, as part of the South Carolina ANG. 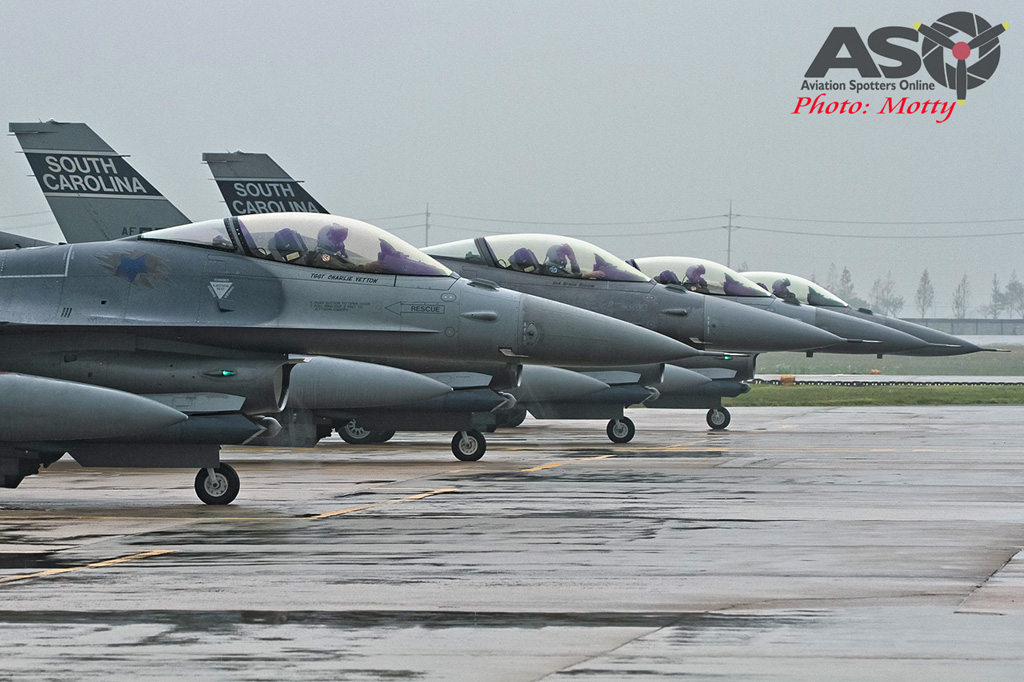 In 1950 the unit swapped their RF-51s for RF-80 Shooting Star jets before deploying to Europe for a short time as part of the 117th Tactical Reconnaissance Wing (TRW) in 1952 before returning to the US and re-equipping yet again with the H version of the venerable F-51. Following the end of the Korean War in 1953, the unit began receiving F-86As and F-80s to replace their Mustangs. 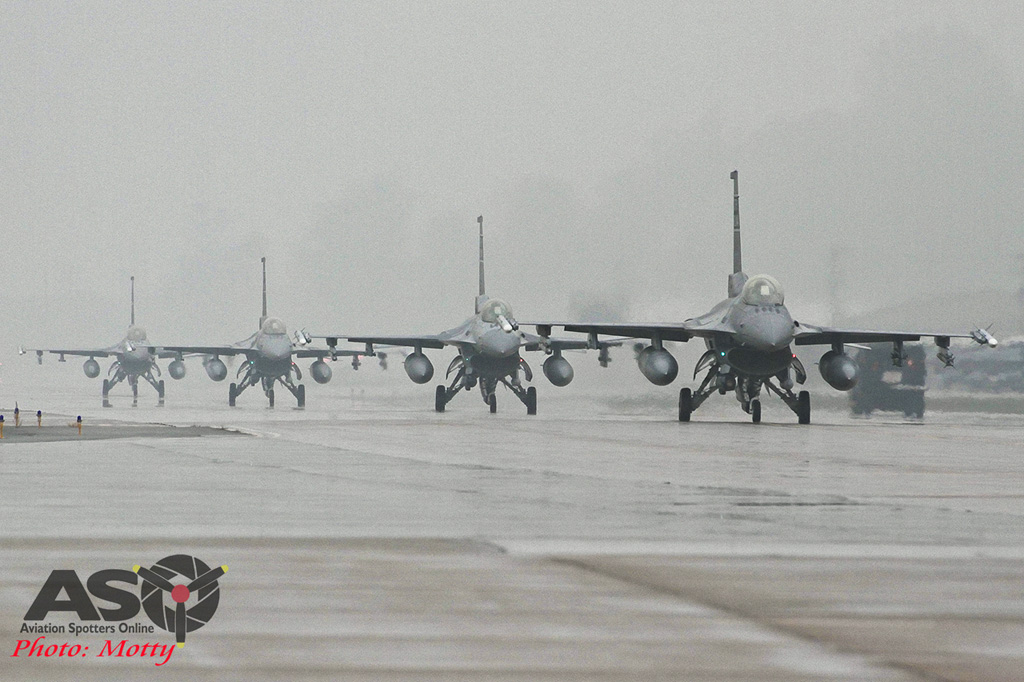 In September of 1957 the 157th was expanded to become the 169th Fighter Interceptor Group (FIG) and, shortly afterwards, received the F-86L Sabre Dog. In 1960 they converted to the Mach 2 F-104A Starfighter; one of only three ANG units to do so, in recognition of their high performance over the years. It was during this time that the unit’s first Commander, Brigadier General Barnie B. McEntire, Jr. was killed when he flew his crippled F-104 into a nearby river In order to avoid populated areas near Harrisburg, Pennsylvania. In recognition of his sacrifice, the unit’s  base, originally called Congaree Air Base, was renamed to McEntire Air National Guard Base, which it bears to this day. 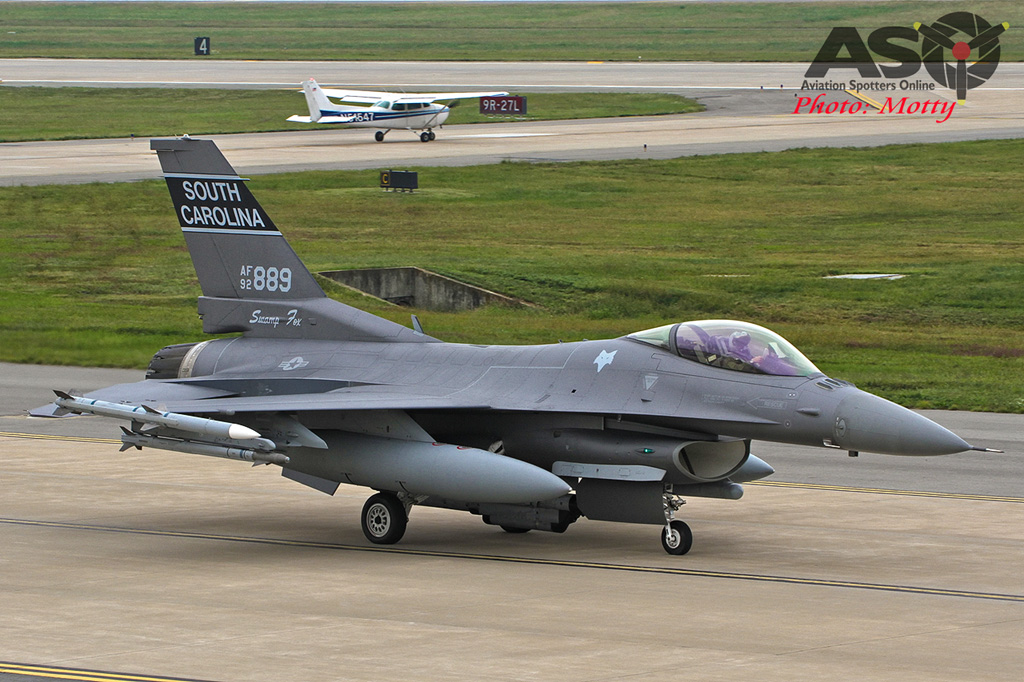 In the following years the 157th operated the F-102A and A-7D before receiving their first F-16As in 1983 and has deployed to several different areas in time of conflict. Receiving their first Block 52 models of the F-16C/D in 1995, while the unit’s mission is that of multi-role, they specialize in the Suppression of Enemy Air Defence (SEAD) role (also known as Wild Weasel, from the development of this mission in Vietnam) as their aircraft are equipped with the Harm Targeting System (HTS) and are able to carry the AGM-88 High-speed Anti Radar Missile (HARM). One of the aircraft present during my visit carried tail art marking 50 years of this mission (as a whole) in 2015. 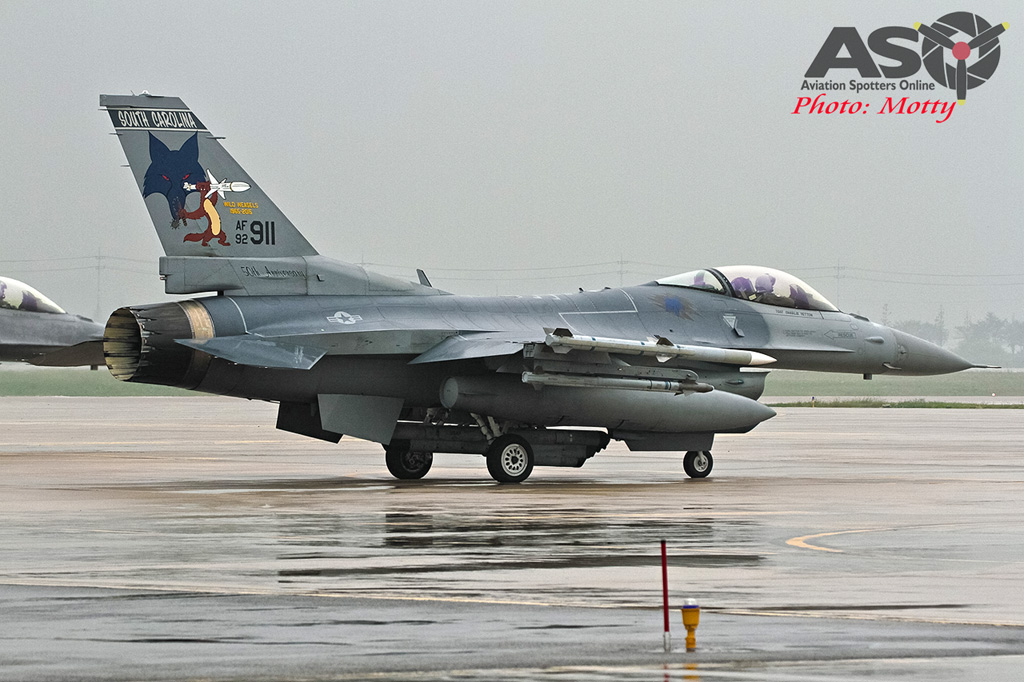 Arriving from their home base at McEntire Joint National Guard Base, near Columbia in South Carolina, in July; the 157th FS immediately began flying sorties alongside their hosts from the 51st FW. The Swamp Foxes’ operations are integrated with those of the 51st to carry out joint missions covering all of the various profiles that they might be called to employ during a time of conflict in the area, such as air-to-air, close air support or SEAD (a specialty of this particular unit) etc. as well as gaining theater specific knowledge. 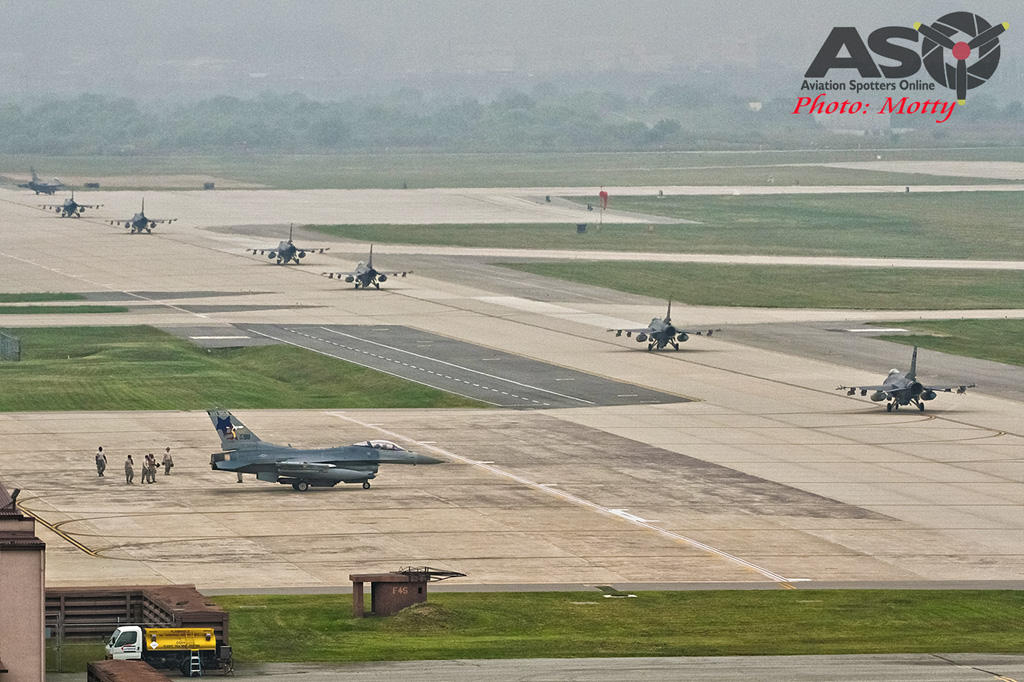 The learning is not all one-sided though. Indeed, far from it, as Air National Guard pilots and crews are themselves often very highly experienced and have served many years in the active USAF (including combat tours) before moving to the Guard and may have even served previous tours in Korea during that time too, so they will have a lot of their own experience and knowledge to pass on to the active units as well. 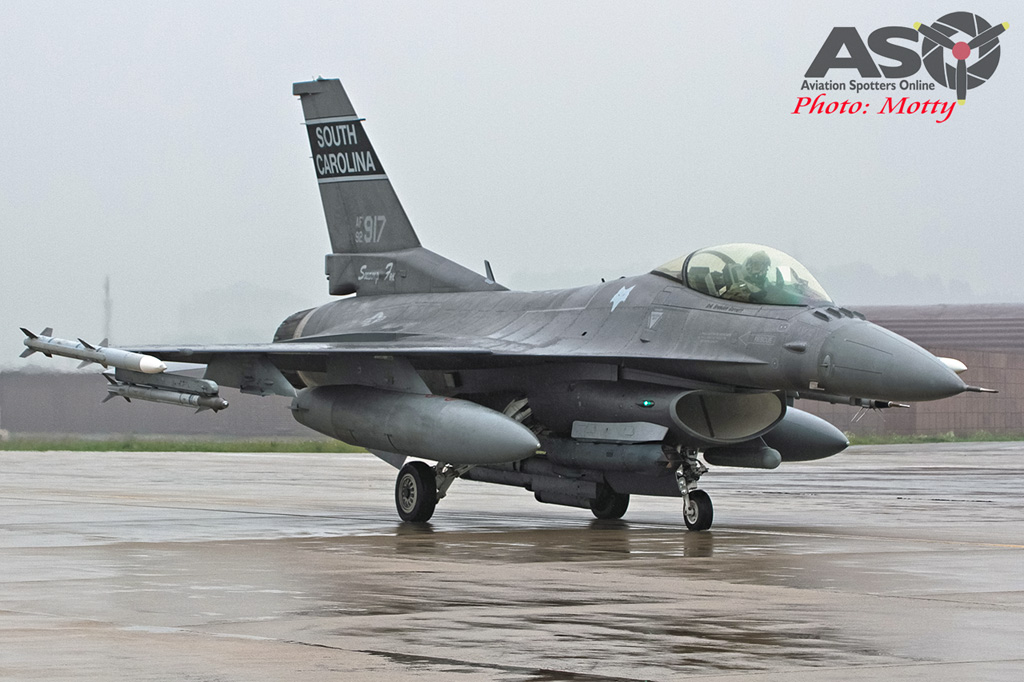 It’s not just all about training though as, like all forces on the Korean peninsula, the 169th must also remain prepared to mount active missions with minimal notice in case of increased tensions with North Korea which puts an added “edge” onto the day to day operations of the air and ground crews. 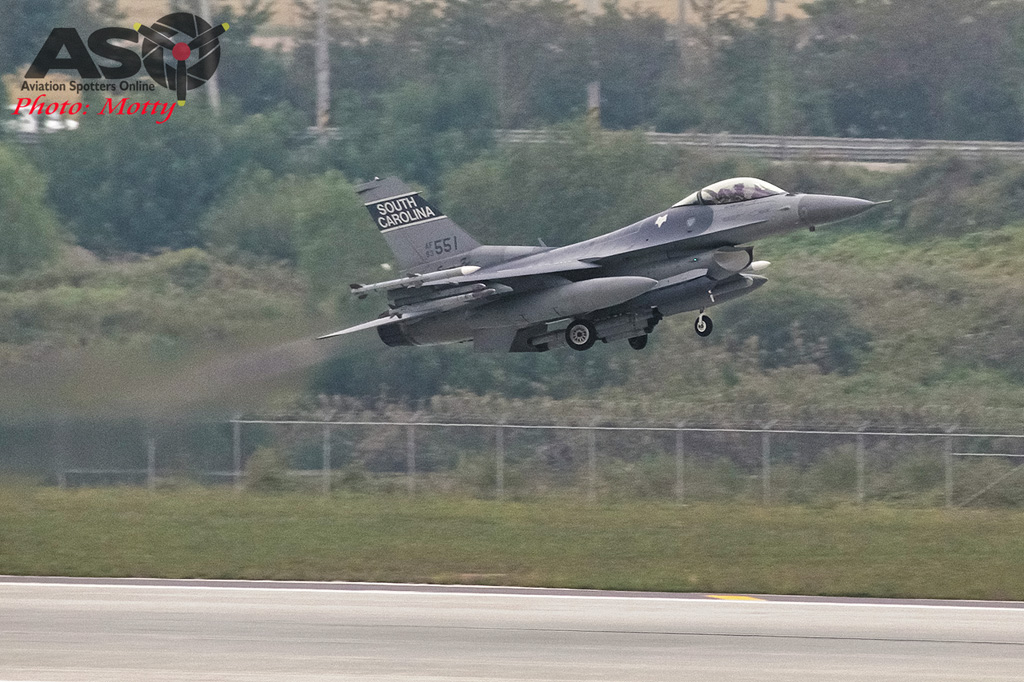 An interesting aspect of seeing these particular machines, from a spotter’s point of view, was the chance to finally see the new “Have Glass V” colour scheme in the flesh as several of the unit’s aircraft were wearing it, with some appearing a uniform grey overall, while others seemed to sport a slightly more weathered appearance which gave a noticeable metallic look to the finish. While the weather wasn’t the greatest during my visit, it does highlight the ability and professionalism of everyone involved that these units are prepared to conduct whatever may be required of them in any conditions. My sincere thanks to the men and women of the 51st & 169th Fighter Wings for allowing me the privilege of visiting Osan and being able to witness their daily operations. Exercise Pitch Black is taking shape right now in the Top End and while the latest arrivals are already flying to get familiarisation of the Local Area Sid Mitchell has got straight into the action and it’s only going to get better. What:  Night familiarisation flying in preparation of Exercise[…]

Here is a brief gallery of images of 2OCU’s 2019 Special Hornet Scheme during it’s delivery flight from RAAF Base Amberly, where it was painted, back to its home base at RAAF Base Williamtown in NSW. The aircraft is painted in distinctive colours to celebrate the unit’s final year of[…]

Being one to frequent airshows, I usually find myself constantly filming and ending up with hours, upon hours of vision from each Airshow that I attend. During the Australian International Airshow, which is held every two years at Avalon Airport in Victoria, I tend to spend up to 9[…]