Today Air Commodore Mike Kitcher, Officer Conducting Exercise Pitch Black, has officially wrapped up the exercise for 2018.  With representatives from 10 different services across 8 of the 16 nations involved in the exercise, it demonstrates just how diverse Pitch Black has become since it’s humble two nation beginings back in the 1980’s.

Between a backdrop of the Royal Malaysian Air Force A400M Atlas and to the other side a Republic of Singapore Air Force KC-135R Stratotanker, AC Kitcher welcomed us to another sunny morning at RAAF Base Darwin – “The exercise concluded yesterday with a final debrief yesterday afternoon and a hot wash up this morning after 10a.m, and already people are preparing to depart. Looking at the flightline, here with the KC-135 and A400M, behind me the C-27 and the fighters, they have all got to get out of here over the next few days”

“So Pitch Black this year was the biggest we’ve had thus far and has been certainly very successful. We’ve had over 4000 people from 16 different nations, 140 aircraft and a lot of firsts for the exercise. The missions we flew were all very successful and the training deemed by all of them (partners) was first class”

“Over the course of the three weeks we’ve flown over 1300 sorties, which is the most sorties flown in a Pitch Black, and we’ve done that safely which is extremely pleasing to me and one of the most important factors. One of the firsts has been the use of the E/A-18G Growler and the C-27J and also the first time we have stood up a bare base airfield, down at Batchelor. That was a really important step for us in practicing to be able to provide humanitarian assistance in various scenarios, which we are called on to do regularly around our region.”

“For our foreign participants, a couple of firsts – the Indian Air Force for first time here with their Sukhoi’s and C-130J aircraft, the French are back for the second time, first time with their Rafales, and the Malaysians are back this year and you can see their A400M behind me here, which has been participating in the exercise as a tanker”

“One of the strengths of this exercise was the international participaton, and one of the objectives of this exercise was to make sure we strengthen our regional partnerships and also to improve our interoperability throughout the exercise. I flew in a mission yesterday as Red Air – that mission was extremely complex and the way that the nine different nations and their aircraft worked together was extremely impressive”

“I realise the noise is about to end and we do thank the Darwin population for putting up with it and we do respect their support during the exercise – we do our best to minimise it. Thank you to Darwin, we enjoyed putting on the Mindil Beach display and the Open Day and I still enjoy getting airborne out of here and seeing people off either end of the runway showing their support, and we really do appreciate it.”

One by one the members of the group, from RAAF LACW through to IAF Group Captain, introduce themselves. A diverse range of ranks and roles from security forces to detachment commanders, battlespace managment and surveillance to logistics and communications. All important components that come together to make Pitch Black such a successful exercise.

AC Kitcher goes on to say ” Its really important to note that behind us there’s only a few aircrew. The majority of people are not aircrew and if you think of the 4000 people who are involved in the exercise, only about 200-250 of those are aircrew. The others are essential support personnel that makes this exercise tick, whether is refuelling aircraft, maintaining the aircraft or the people that stood up the bare base at Batchelor, whether it’s the supply personnel ensuring the spares get to the aircraft or people that are providing security for the aircraft such as this young lady and her dog here today, or even those that are running the messes – that’s what makes Pitch Black tick”

“It was certainly good to see when I went to the messes here, Australian and Marine Corp cooks in there and later on the Indian cooks got involved – and so we had some cracker curries there later on in the exercise as well.”

“And thats the sort of thing we see at Pitch Black, where young men and women get together and just make things work”

“So just want to say again the exercise was a success and we acheived what we wanted to acheive with all our international partners who are standing behind me today. I hope that Pitch Black will grow and we can expect to see a similar amount of people here in 2020 – I would say for certain the F-35 Joint strike Fighters will be involved in Pitch Black 2022 – there’s a chance they will be involved in 2020 but we will have to see how that goes”

As for the types of scenarios during the exercise – “We conducted a bunch of varied missions in the exercise. In general Darwin is the hub of the Blue Forces and Tindal is the hub of the Red Forces or ‘Baddies’. Up to 60 or 70 aicraft would launch from Darwin and go down to just south of Batchelor (aprox 100km south) where they would marshall, refuel if need be and get set to ‘push’. The Red Forces would marshal about 250 miles (400km) south of Darwin and the airspace that we fight in is one of the largest in the world, including Bradshaw and Delamere weapons ranges beneath the airspace as well.”

“The missions varied as they should, some were designed to escort a C-27 or C-130J into Delamere Range to drop some special forces off or pick some people up. Some were designed to get strike aircraft in to strike at notional targets, some missions were Close Air Support (CAS) where we had Joint Terminal Attack Controllers (JTAC) and Forward Air Controller (FAC) at Delamere with a real enemy located on the ground at Delamere. We had Hornets and other aircraft over the top providing CAS for those people as they engaged the enemy in the ground battle”

“Whilst there is a focus on fighter v.s fighter, this Pitch Black was special in that we integrated a lot of the ground elements and that was extremely successful – and having flown a couple of those missions, (against ground elements) they were quite challenging”

I wander about the different services and they all say they have really enjoyed the experience of this exercise here in the Top End, some for the first time in Australia, enjoying the tourist attractions on offer and joking about discovering how many “things that can bite, sting, poison and kill you here”. Some, like the RMAF deployment personnel were able to enjoy the hospitality of local family who provided a huge evening meal – cooking up some real home grown traditional Malay dishes.

I talk with a couple of Royal New Zealand Air Force officers – FLGOFF James Macintosh and FLTLT Daniel Hook – both have been here invloved with the Logistics side of Pitch Black – working at Air Movements for example. They mention how similar a lot of the physical aspects are – pallet and load sizes etc – ‘We are aiming to standardize almost all that we can to make it that much easier to integrate between the Air Forces, but there will be some small items that remain different just due to a different way of doing things in each service ‘ Dan is also the RNZAF Detachment Commander for this deployment and we all chat about the 40 Sqn B757 that was in yesterday and the T-6C Texan II advanced trainers the RNZAF aquired a few years ago – plus how many RNZAF aircraft pass through Darwin on deployments north. Inevitably we turn to discussing the Rugby – I surprise them by saying my money is actually on the All Blacks taking on Oz and they have a laugh and reckon I am throwing my money away.

As we are ushered away to our transport we see the RAAF flightline crews performing a FOD walk in preparation for the Super Hornets to depart – nearby the RSAF crews are almost done getting the KC-135 ready.

It certainly was a huge exercise but surprisingly the local Darwin public seemed to embrace the action, noise and military traffic more than ever…maybe it was the impressive Mindil Beach Display, maybe the largest Open day, who knows? Being a local I have met many that are already looking forward to the next Exercise Pitch Black in two years time…”bring it on” they say.

Many thanks must go to the Exercise Pitch Black Public Affairs team – Eamon, Peter, Marina, Patritia and the PB team for arranging the various media events, often at short notice.

And of course to all the aircrew, maintainers and support teams of the various air forces that gave their time to allow us to share their world for three weeks during this Pitch Black – we look forward to seeing you again soon.

Cheers from Sid, Mark, Phil and Leigh from ASO.

Wrap up RAAF Base Darwin 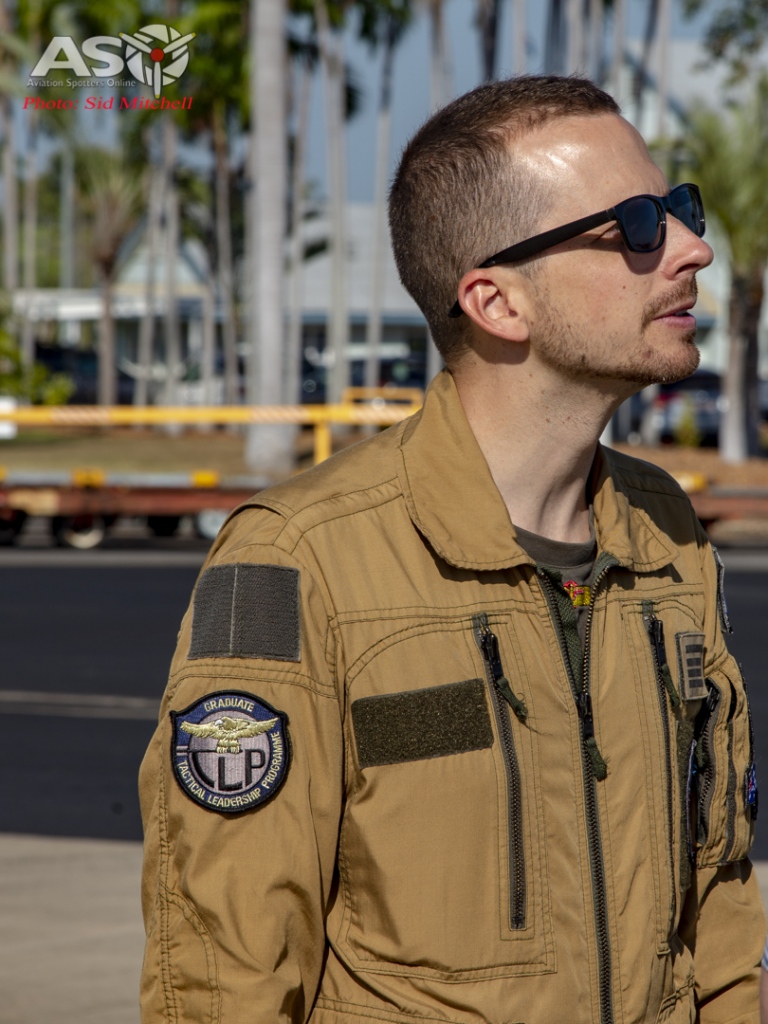