Flight of the Hurricane

Who says you can’t have a mini Air Show in 5 weeks time ?

Well this is how the whole “Flight of the Hurricane” public flying day came about. Once the 1st 2 flights had been made the team at Vintage Fighter Restorations and owner John Brooks really couldn’t believe just how much public reaction there had been to the successful flights. A meeting was arranged to see how they could give the public a chance to witness the aircraft in flight and why not, at the same time, raise as much money as possible for the local Westpac Rescue Helicopter service?  The date was set for the 12th November which was only 5 weeks away from the meeting , so what do we need to do ?

The word was put out to see what other Warbirds could fly in but as the date clashed with some Warbird annual meetings plus a few aircraft in for maintenance meant that not many could make it but straight up Temora Aviation Museum confirmed a Scone favorite the MK.VIII Spitfire would come back to its home and Paul Bennet Airshows jumped on board just as quick and confirmed his mini air force would join the action.

As the old saying goes “only the rain can stuff things up now ” and boy did it give everyone a fright the night before with close to 30mm of rain hitting Scone but as luck would have it, the skies cleared early morning and it ended up being a very pleasant day for everyone. The crowd of close to 4,500 made their way in for what would be an historic day of flying at Scone.

Pual Bennet got the show underway with his spiral laps around the massive Australian flag .

While Paul Bennet started the show Steven Death moved the TAM Spitfire MK.VIII to in front of the crowd .

Next up was the FireBoss fire fighting aircraft used by PAY’S Air Services to show the crowd just how this massive aircraft can be used to help control bushfires. 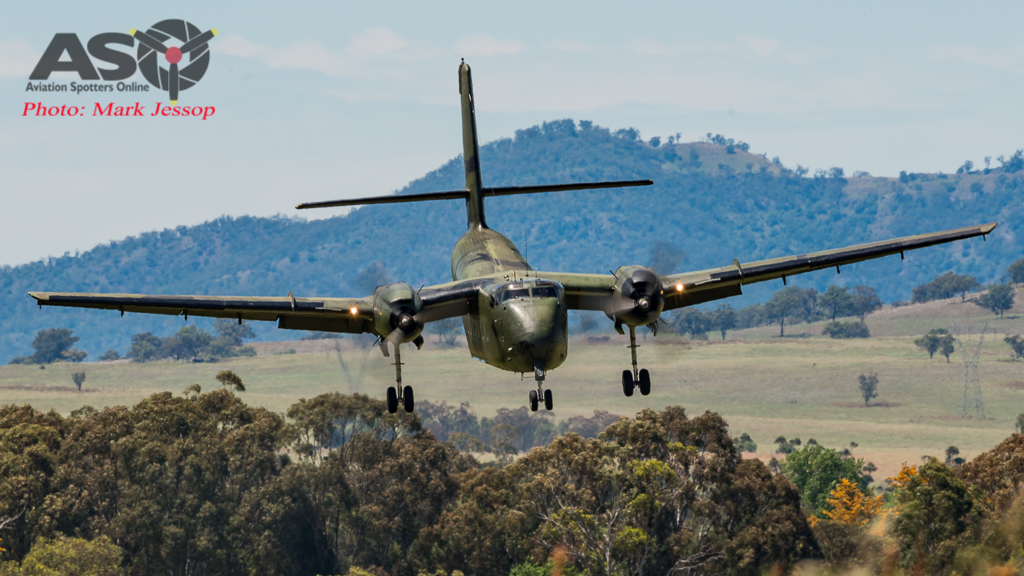 The HARS Caribou about to land at Scone.

Next up was Tim Dugan in the CAC Wirraway and he put the aircraft through an amazing handling display.

Next up was Paul Bennet in his T-28 Trojan.

While the display’s were on the PAY’S Robinson Helicopter was being used for joy flights are the Scone area.

The time had come for the aircraft everyone had come to see make it’s public flying debut and with so much interest in this aircraft the crowd were treated to some beautiful flying by Ross Pay.

Steve Death performed a classic display in the Spitfire showing off the iconic lines of the fighter.

The moment the crowd had waited for and the a sight not seen for close to 70 years in Australian skies.

Next up Steve and Ross formed up for a few formation passes to please the crowd, even thou both aircraft have the same engine the note given out by each was very different due to the different design of the exhaust.

After a short break to let everyone take in the moment of seeing a Spitfire and a Hurricane in the air at once it was time for the CAC Mustang and T-6 Harvard to perform for the crowd.

While the show was still on I was called away to get some very rare photo’s with some of John Crossman’s family decedents who had brought John’s medals and flying log book with them.

Once the flying displays had been completed it was time to open up the hangar and let the public get up close to the Spitfire and Hurricane. The team from Vintage Fighter Restorations were on hand to answer the many questions from the public abut the Hurricane and the next project underway which is a Spitfire.

While this was just a ” one off ” to let the public see the Hurricane in flight I’m sure that by the time the next project is ready for public display that the chance of seeing another public flying day at Scone Airport will happen. The final amount raised for the Westpac Recsue Helicopter was $20,000 and ASO would like to thank everyone involved who helped make this day happen. A lot of people donated their time and money to make everything come together and it couldn’t have been the success it was without people and companies like Paul Bennet Airshows, Temora Aviation Museum, Jetride Australia and Pracy Racing, Scone Aero Club, Upper Hunter Shire Council, Aero Refuellers, Ausure Scone, G.J. Gardner Homes, HARS for bringing up the Caribou, the team from Luskintyre who flew in their beautiful aircraft and all of the volunteers, and everyone who attended making the Flight of the Hurricane a very memorable and successful event.

For more information about the Hurricane click the link – http://aviationspottersonline.com/hawker-hurricane-flies-in-australia/

Mark has pretty much laid out the events which led to this wonderful and historic day above and everyone involved, at every level, need to to be thanked for their efforts in enabling such a great day to come together in such a short time.

The afternoon before the show, we had been treated to a short preview as Ross made a short publicity flight in the Hurricane as well as the chance to see him escort Temora’s spitfire on its arrival, in his Mustang. A moving sight as both these machines were once stablemates at Scone when Ross’ late father, Col Pay restored VH-HET, becoming the first Spitfire to fly in Australia since WWII. Aviation firsts seem to run in the family. 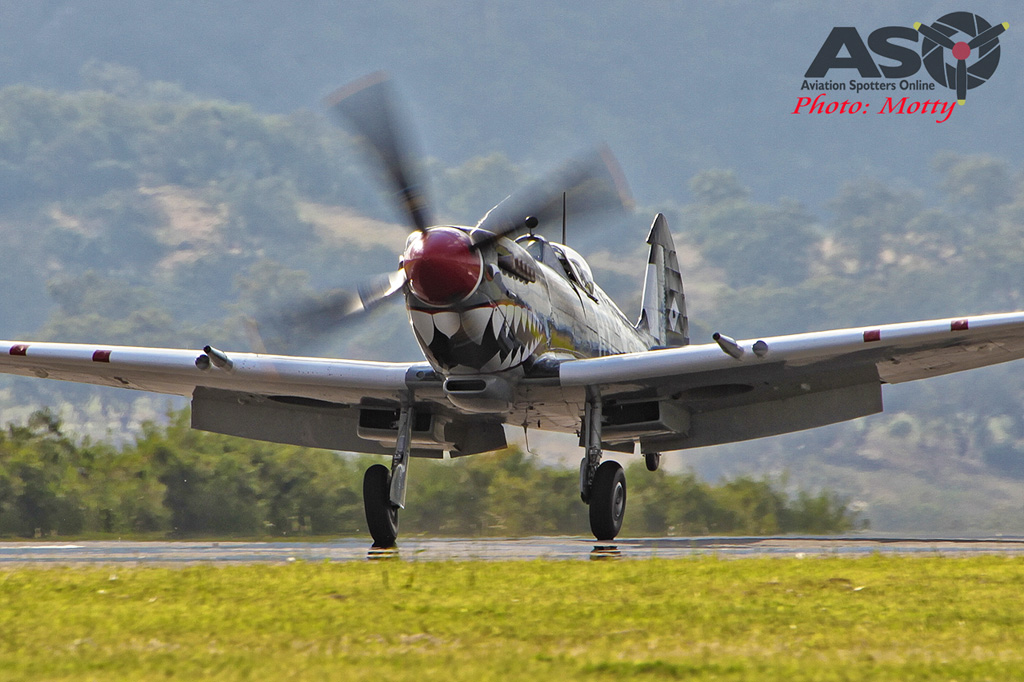 I drove up from Newcastle on the morning of the show with trepidation as the weather was terrible the entire way, with lightning and thunder thrown in for good measure. Things were no better by the time I arrived at Scone and I’m sure there were many people dreading that all their efforts would be in vain. But, around 7am, there was a small flash of sunshine and then, to everyone’s great relief, almost as if a switch had been flicked, the weather cleared in about 30 minutes to a beautiful blue sky and marvelous light. The show was on!

With the good weather came more aircraft with pilots bringing their own pieces of interesting and classic aviation to the show and to see the day’s historic event and, as Mark mentioned, there was a surprise (and very welcome) arrival by one of HARS’ huge Caribous. 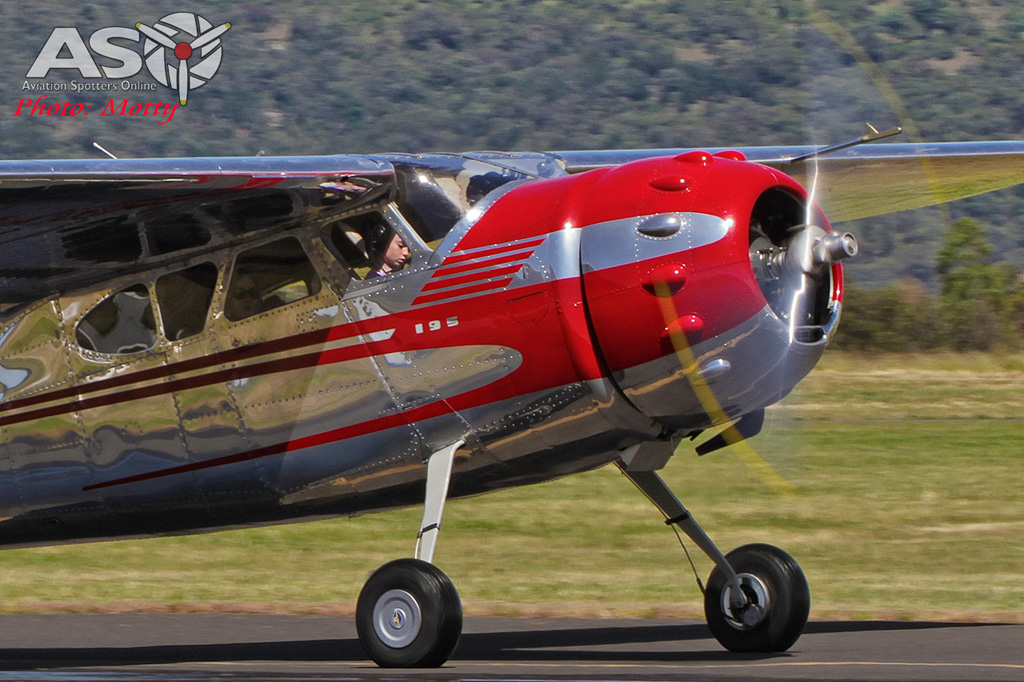 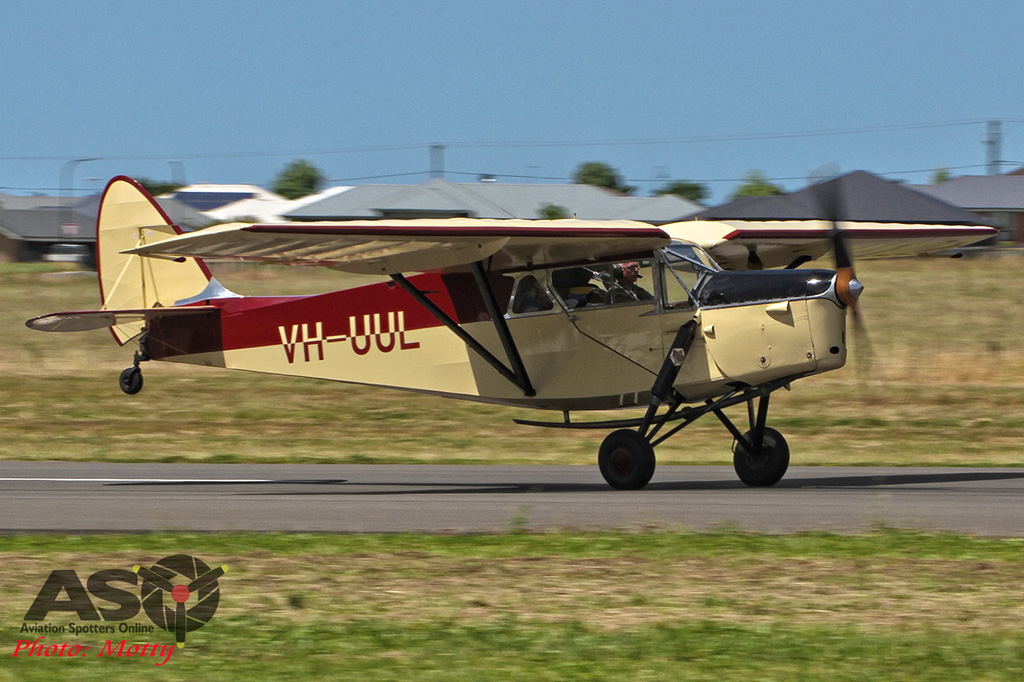 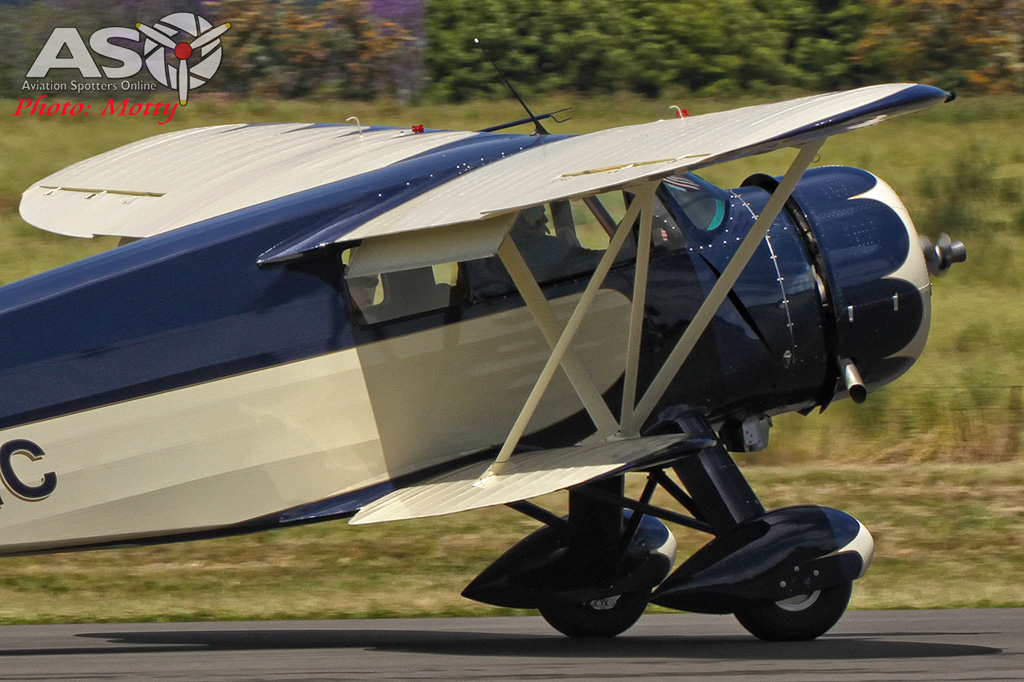 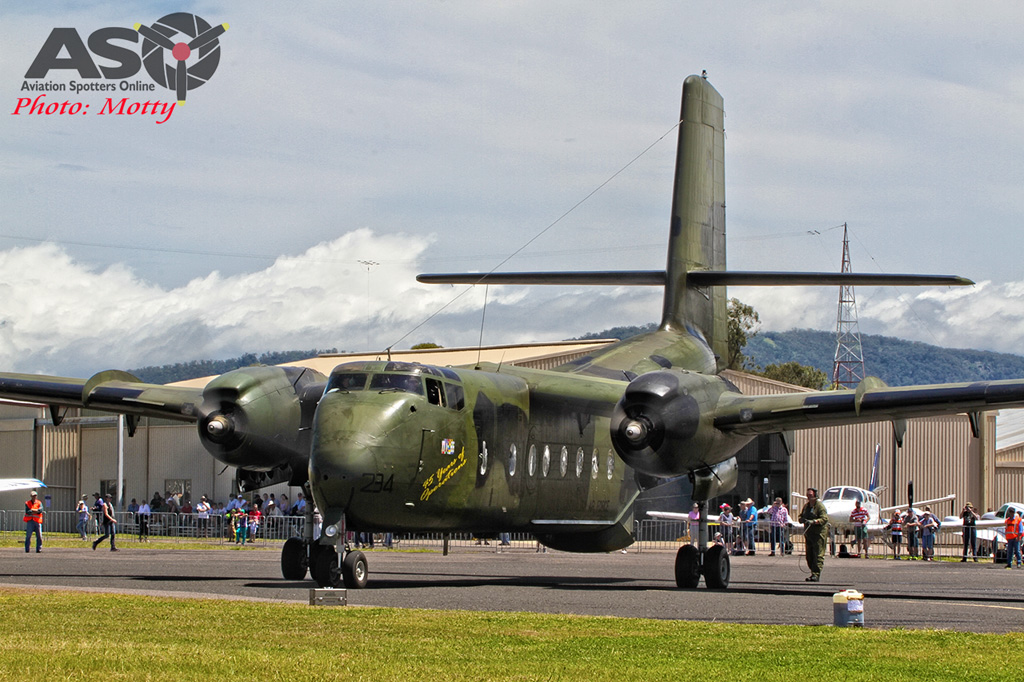 On to the flying. 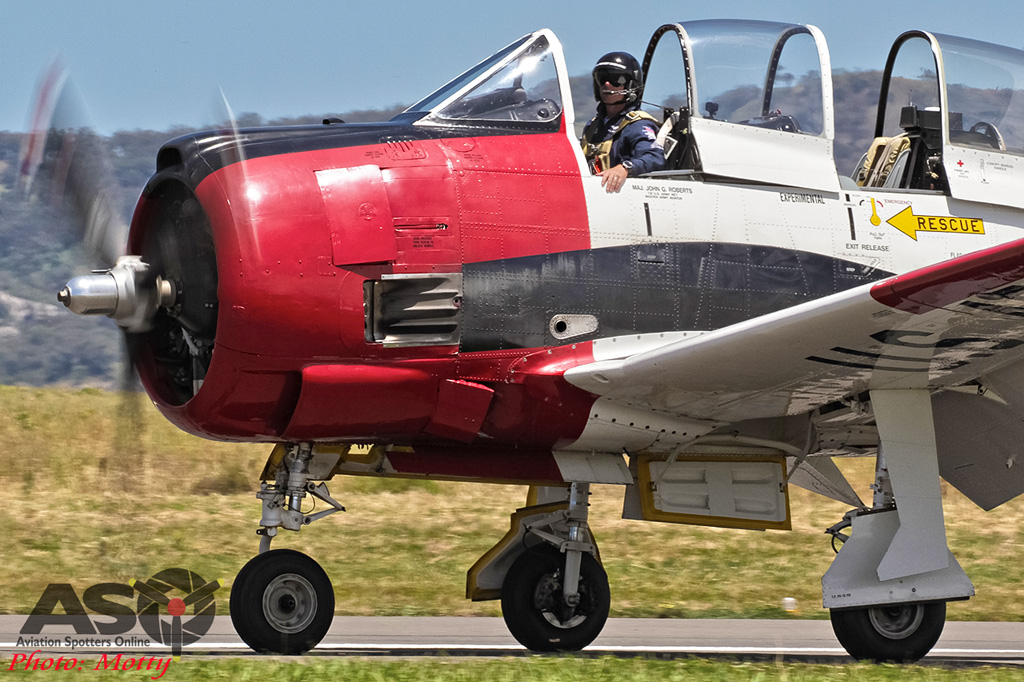 As expected, the highlight, and entire reason for the show was the chance for everyone to get to see the iconic Hurricane take to the air. With the threat of strong winds forecast for later in the afternoon, the organizers moved the Hurricane flight up the program to earlier in the day than originally planned to ensure that the crowds would get to see what they came for too. 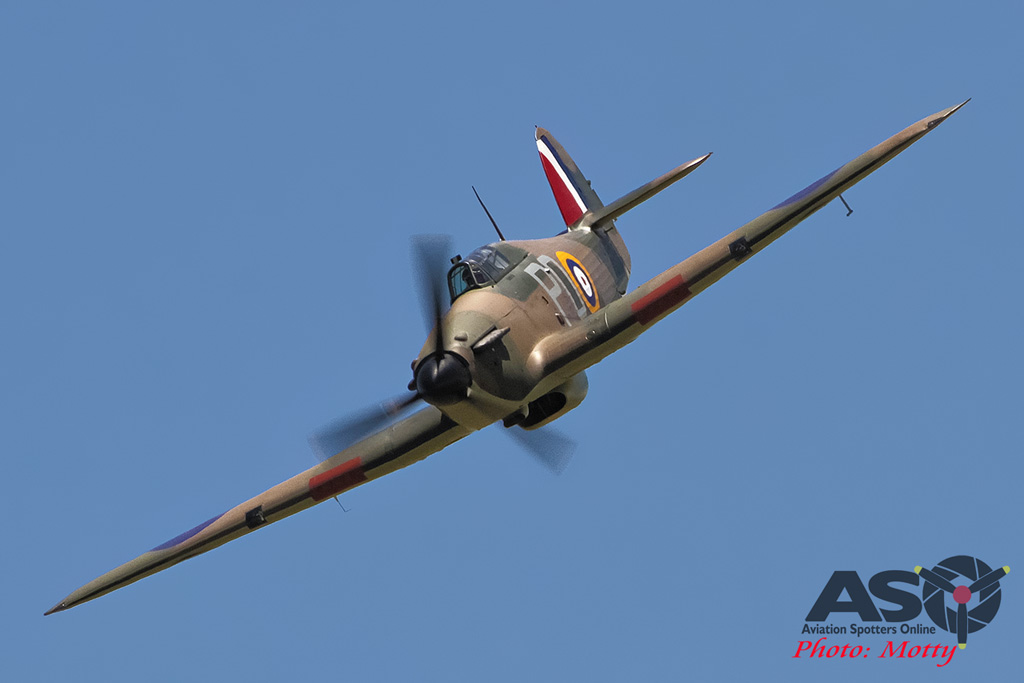 The decision to fly Temora’s Mk.VIII Spitfire and Vintage Fighter Restoration’s Hurricane together was a momentous one too as the chance to see two of WWII’s most iconic machines in the air together, probably for the first time ever in Australia, was a truly memorable sight and sound!

The afternoon’s flying saw more incredible displays from Ben Lappin in Paul Bennet’s Avenger, Paul Bennet, in his Wolf Pitts Pro, Mark Pracy in his L-39, Ross Pay in his Mustang, Steve Death in Ross’ T-6 and finished off by a formation display by Glenn Graham and Paul Bennet in their Yak-52 and Wolf Pitts. 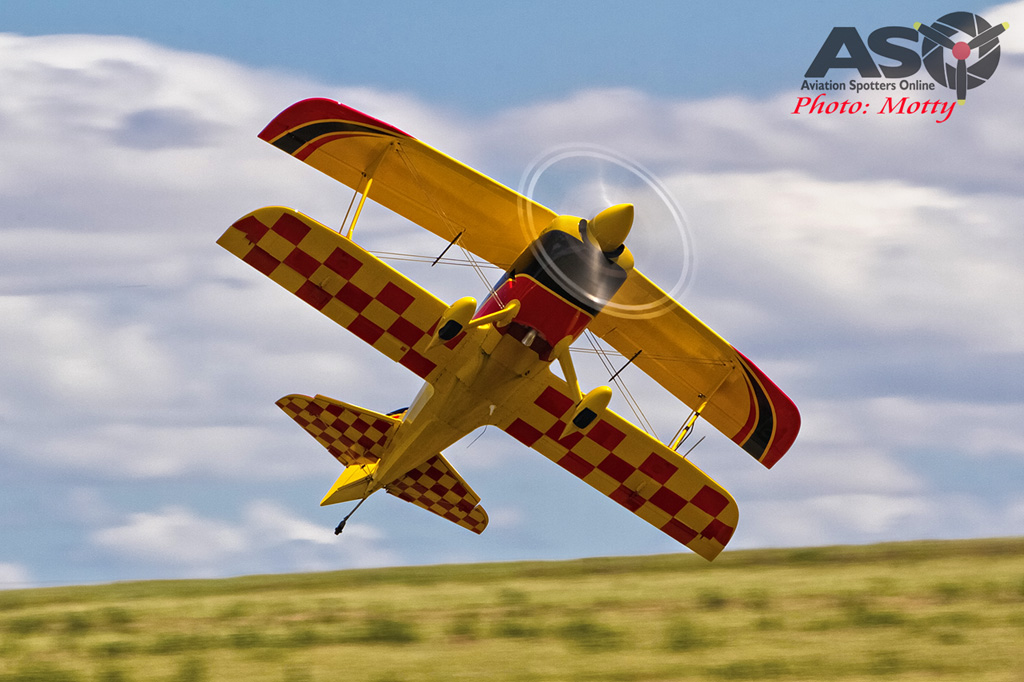 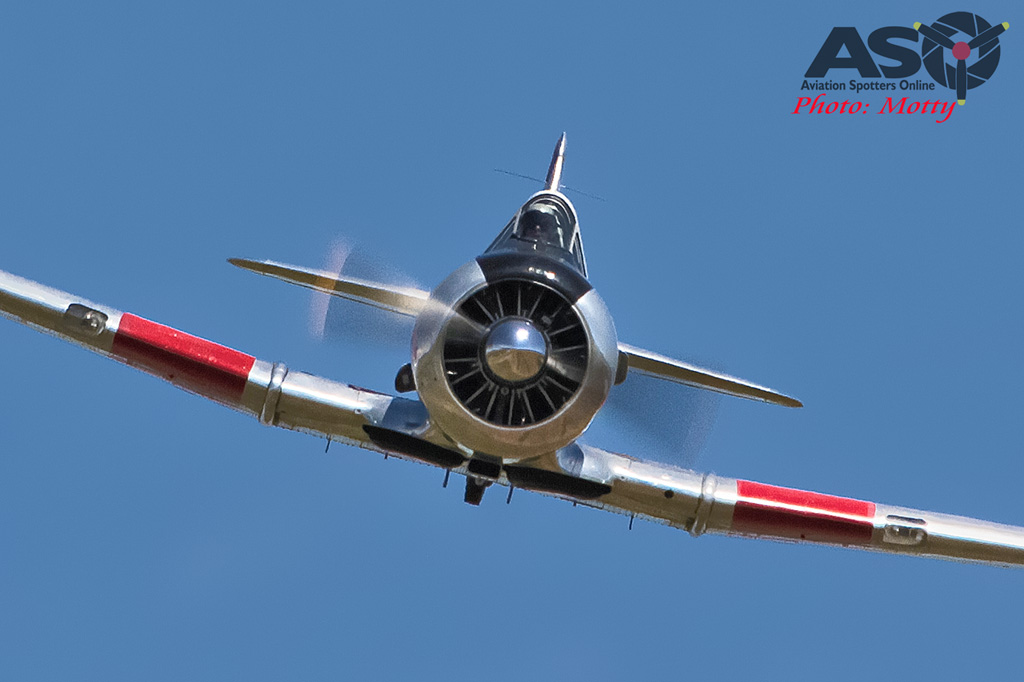 After the display was over, some pilots headed home, including HARS’ Caribou. 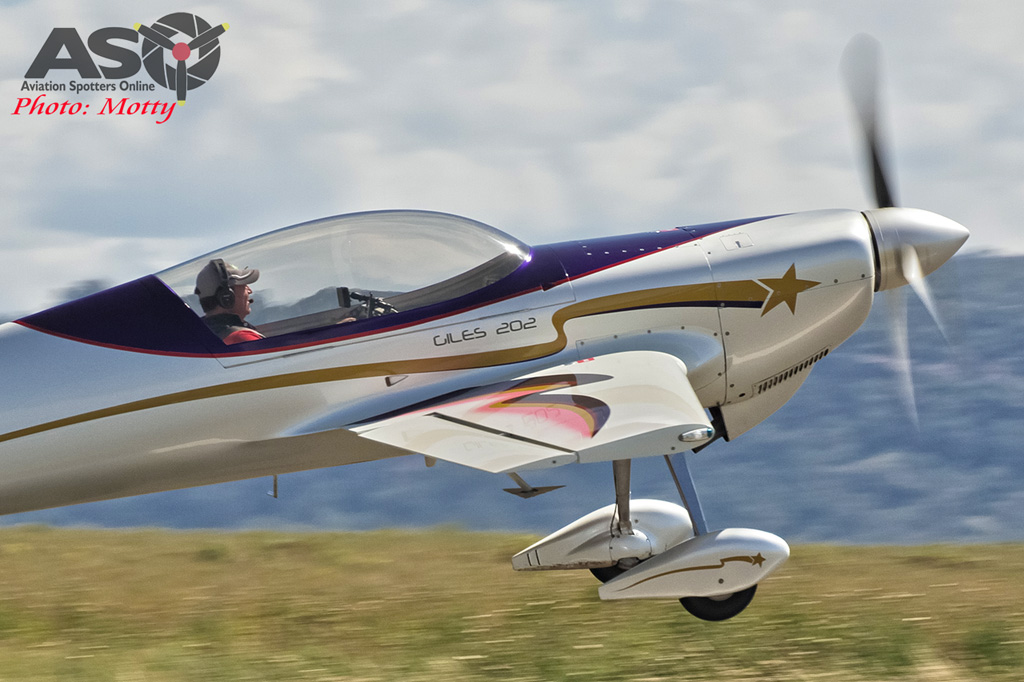 Once everything was packed up and put to bed, everyone retired to the Scone Aeroclub for rest and refreshments. Later in the evening, there was a semi-formal dinner which included Jeff Watson as a guest speaker and an auction where Items were offered up to raise further funds for the Westpac Rescue Helicopter. These included a framed piece of original fabric bearing the serial number worn by the Hurricane prior to its restoration and a very large framed air-to-air photo which had been donated by none other than our own Mark Jessop, which went for a tidy sum too.

As Mark mentioned above, an event like this would not have been possible, in such a short time, without a great deal of effort by a lot of people and organisations working together so well to come up with a generous opportunity for a piece of aviation history to be seen by so many. It is a tribute to each and everyone involved that the day was such a great success and raised a valuable donation for a very worthy charity too. It was a great honor to be allowed to be a part of such a wonderful event.

Click HERE to see the full gallery of Motty’s images.