Australia’s biggest car race was on again. The Bathurst 1000 attracts every car nut in Australia to the ” Mountain” (mount Panorama) but for me it’s the best and shortest drive I can do to see a Hornet display. Every year since I started going, the Royal Australian Air Force has had the F/A-18A Hornet perform a display each day for the crowds. While each display doesn’t go for more than 10 minutes it is certainly worth the 2.5hour drive each way. This year after a lot of hard work behind the scenes I was allowed to cover the Saturday display from a Helicopter. To say this would be a dream come true is an understatement. Working with the team from Sydney Helicopter’s was a privilege as the scale of the operation over the week is something you have to see to believe, with up to 200+ flights on the main race days using 4 helicopters, you can see why so many people come back and do it again . 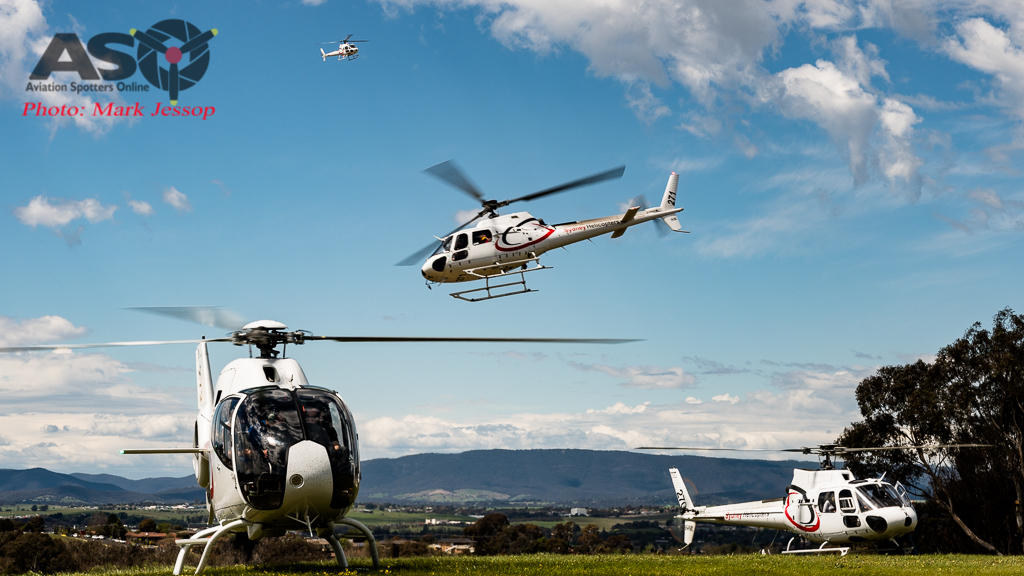 The display time for Saturday was 17:00 so the light would be awesome, but first we had to get picked up by one of the choppers to get our lift into the event. The fuel base was setup in one of the paddocks close to the track and about every hour each chopper came in for its turn of Avtur. I have to say there is nothing better then arriving at a big event via a chopper. Peter and I set up at the chopper base and just enjoyed the non stop action , watching so many people having their first helicopter flight and getting out of the chopper with beaming smiles.

The time was getting close and all the other choppers landed as our came in to pick us up, we where allowed to hold in one spot north of the display box at around 1.8km  at the closet point to the flying line. As you would expect the RAAF F/A-18A Hornet arrived right on time and once the airspace was confirmed clear FLTLT “Bung” launched straight into one of his favorite displays. It is a totally different experience hanging out of a helicopter trying to hold onto a Nikon D5 with a 800mm 5.6f hanging off the end of it while at the same time communicating with our pilot as to the position I wanted to be in .

The planning around the shoot was to start at the same level as the entry height of between 250 and 300ft and climb up 200ft after each pass so that we had a different angle for all the passes. The thing which is not seen from ground level is just how much each pass is different and just how Bung sets up for each run in. We had some key images we wanted to capture with this shoot and having the Mount Panorama Bathurst sign in the shoot was the highest on the list .

While these photo’s are cropped in it’s not until you see a photo from the same angle taken with a small lens do you really see just how far away we are and the power of the 800mm. This next photo was taken by Peter Chrismas using a Nikkor 24-120mm lens f.4 at 24mm. The amount of movement while looking through the 800mm was pretty full on and even though I have seen the display many times the aircraft was very easy to lose sight of.

Even with the headset on and the noise of the rotor wash you can very clearly hear the moment the afterburners kick in !

One of my favorite parts of the display is the “Corkscrew” and to see it happen from the same height is very impressive due to just how much height drop to gain the energy and then just how that energy is used to make the aircraft spin on the spot then launch straight up to reposition for the high speed pass.

There is a difference between the Saturday and the Sunday display as each one has a different time allowance with the Saturday being the shorter one. Getting close to what would be the last passes we positioned the Helicopter at our max height of 1100ft in the hope to get the pass over the mountain top with the sign in again. The amount of luck is still large no matter how much planning is made beforehand but overall this was one to remember. Now how can Sunday’s display match what we had just done ?

Come for a ride onboard with Bung on his Saturday display-

Is it really possible to top off shooting an F/A-18 Hornet display out of a helicopter? Sorry but the clear answer is NO !

But trying out new locations is something that I highly recommend as it gives you the chance to see a display in a different perspective and the chance to capture shots you may have not known were possible. I had noticed every time I went to Bathurst to capture this display that a lot of the action happens either right in front or straight over the top of the Rydges hotel at Mount Panorama. After last year’s display I contacted the team to try and see what was possible with access and, once the helicopter shoot was locked for Saturday,  Sunday was the chance to just see how good a view it is from Rydges top floor outside .

Using the same setup as the day before, I wasn’t really sure if taking the Nikkor 800mm 5.6f was the right move but when you have access to it you have to use it. Walking up to the Hotel on race day you can tell that these very keen motor racing fanatics sure do love this sport but will they be ready for “Bung’s” final NSW display ?

With Virgin Airlines Australia as a major sponsor of the great race it was fitting that they got the show on the road with a very nice low approach straight over the start finish line and then into their own quick lap around the great mountain. But the main game for me was just about to start and damn I couldn’t wait.

After the first inverted pass it’s an outside roll into the massive vertical climb to pull over the top and straight back down for a very quick tight turn inside the track. As the aircraft holds the turn over the start finish line it’s time for the “Squat” 90 degree roll and back straight up! To say the noise on any of these moves is loud just doesn’t describe how deafening these jets are at full noise and low to the ground. Trying to keep the aircraft in frame with the 800mm was really a big ask but hey you want to be so close that it can’t fit in the frame.

At the top of the climb Bung repositions back down at the start finish line with the two opposite roll inverted pass which leads into the “Corkscrew”. The aircraft from here drops all it’s speed and comes back down over the start finish line in a “high alpha” move to showcase just how slow it can go, but fighter jets aren’t made really for slow speed so once over the finish line its time to kick the afterburners in again for another climb which leads into the high speed pass over the top of the mountain. The display only has one more final pass which can only mean one thing, the high speed pass into climb for height. All up, the Sunday display last close to 7 minutes, from here it’s the short flight back to RAAF Williamtown in under 20 minutes.

For the first time ASO can bring you 3 different angles at once from the Sunday display so sit back and enjoy the full display.

I can not thank everyone involved in making this weekend happen as smooth as it did enough. From Mark at Sydney Helicopters for showing just how well a professional team can put on a non stop event with 4 helicopters to the team at Rydges Mount Panorama showing what it’s like running a Hotel that is booked out close to 5 years ahead.

To the team at Nikon Australia NPS, thank you for believing in these crazy ideas I present to you.

To FLTLT “Bung” who listened to an idea that I thought was only a dream but was keen to see what we could make happen and showed the level of professionalism needed at this level. Thank you for your support mate.