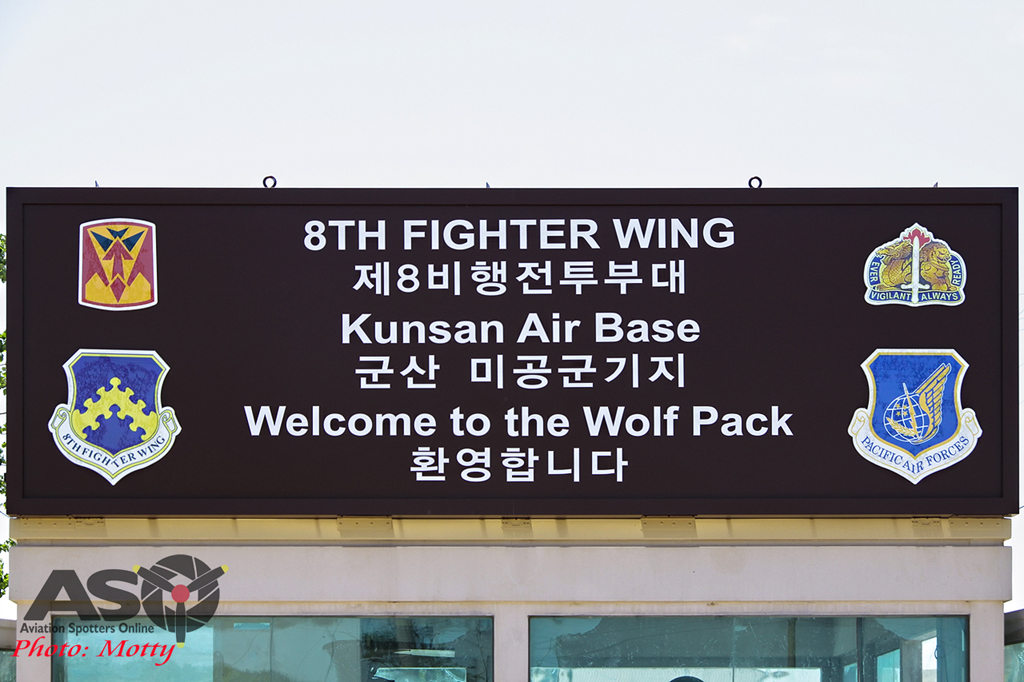 “Defend the base, Accept follow-on forces, Take the fight north!” This is the unusually succinct motto which guides the daily operations of the US Air Force’s (USAF’s) 8th Fighter Wing (FW) in South Korea and while it’s probably just a coincidence, the runway even points due north too. In early June, Aviation Spotters Online (ASO) had the privilege of visiting the 8th FW in Korea and getting to see what makes it “tick”. The 8th FW has a long and proud history, tracing its lineage back to its formation (as the current designation) in Japan in 1948 and, previously as the 8th Fighter Group, right back to 1931. While the unit has played significant roles in both WWII (in the Pacific) and the Korean War, it is probably most well known to many for its operations from Ubon, Thailand, during the Vietnam War. It was there, under the leadership of the charismatic Col. Robin Olds, that the wing’s prowess with the F-4 Phantom in air to air combat against the North Vietnamese MiGs earned them the nick-name of “The Wolfpack”, which has proudly remained with them ever since and is even reflected in the tail code worn by its aircraft (WP), which is one of the very few in the USAF which does not actually relate to the base or area where they are stationed. 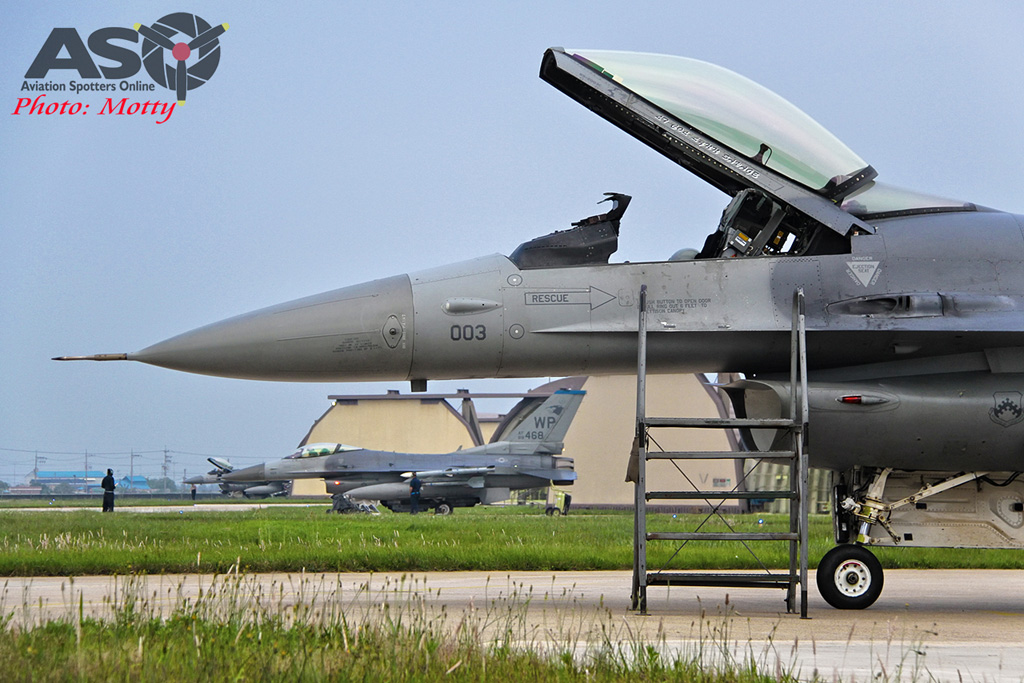 Since moving to its current location at Kunsan (or Gunsan), South Korea in 1974, the 8th has been a key component of US Forces in Korea (alongside their South Korean counterparts) as a counter to the tensions presented by the North Korean regime (The Korean war has never officially ended but, rather, is in a constant state of “cease-fire”, and there have been many small border skirmishes and periods of heightened tensions between the two countries over the years). Coming under the umbrella of the USAF Pacific Air Force (PACAF), 7th Air Force , headquartered at Osan, South Korea, the 8th FW (under the 8th Operations Group) is made up of two flying squadrons, the 35th FS (Pantons-Blue) and 80th FS (Juvats-Yellow), which both fly F-16C/Ds (block 40s), along with the 51st FW, based at Osan, which operates a squadron each of F-16C/Ds and A-10Cs. 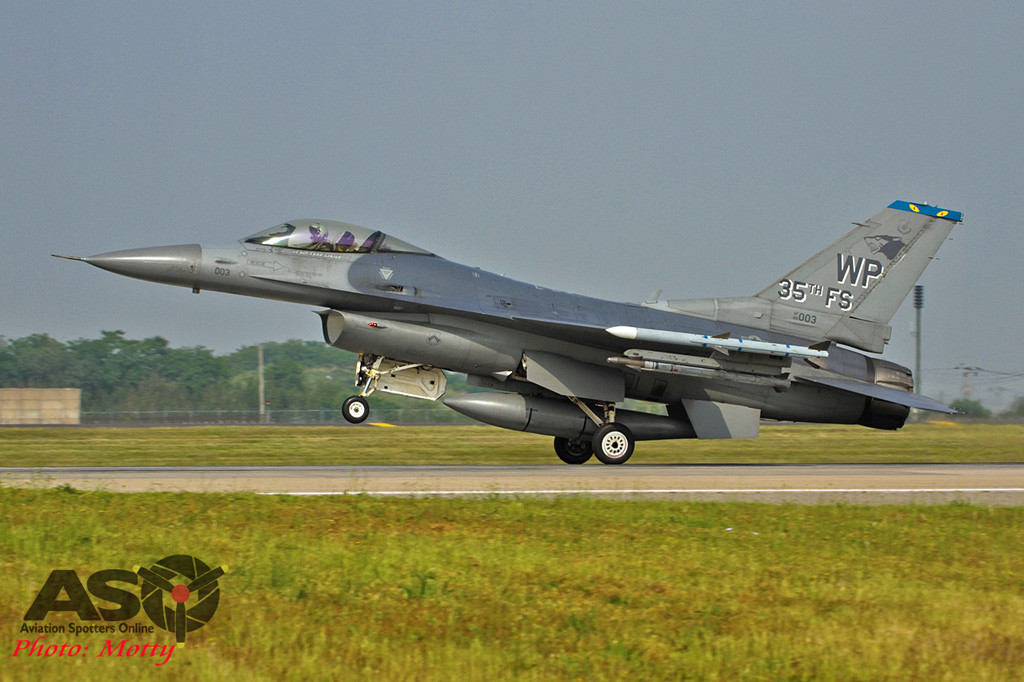 The 8th also has the distinction of being co-located with, and operating alongside the Republic Of Korea Air Force’s (ROKAF’s) 111th FS, of the 38th FG, with their F-16C/Ds as well and, while each has its own training programs and tasking, they regularly work together to perform all manner of combined operations such as air-to-air, close air support, SEAD etc. This close relationship allows them to rehearse for any scenarios they may encounter during actual combat and to develop procedures and tactics that can be equally applied to other US and Korean forces, as the ability to rapidly mount combined operations at short notice would be critical to mission success in time of combat. As their motto suggests, another key mission requirement for the 8th FW is the ability to “accept follow-on forces” should the need arise and regular exercises and detachments hosted by the 8th, both large and small, with both Korean and other US forces, ensure that this skill is maintained at a high level as well. Indeed, during my visit, the 8th was concurrently conducting Buddy-Wing 15-4 with an element of ROKAF F-16s from the 123rd TFS, 20th FW at Seosan as well as hosting the 114th FW from the South Dakota Air National Guard (SD ANG) as part of a longer term Theater Security Package detachment. 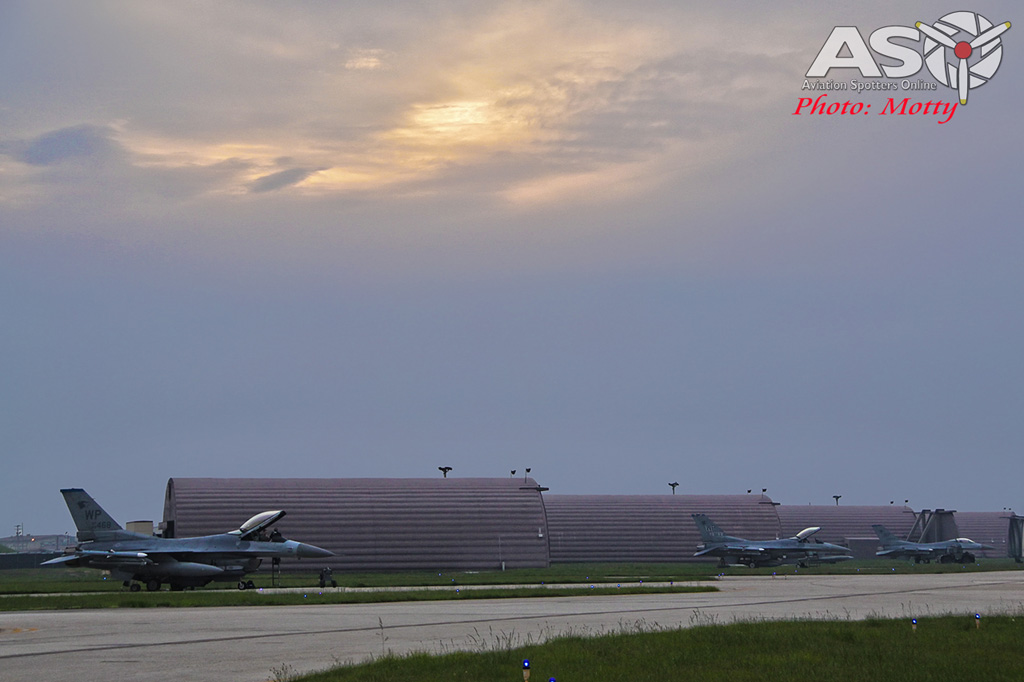 The Wolfpack faces many challenges in its day-to-day operations. The most obvious is the ever-present possibility of being called into action at a moment’s notice, due to the threat posed by the North, whilst still conducting the regular training missions which are vital in maintaining the highest possible state of readiness short of actual combat. This high state of alert also shapes the types of training missions that the squadrons fly as, whilst most units will practice for a wide range of different scenarios or theaters of operations, the 8th is constantly rehearsing the specific mission profiles that it would employ in actual combat, week in and week out. 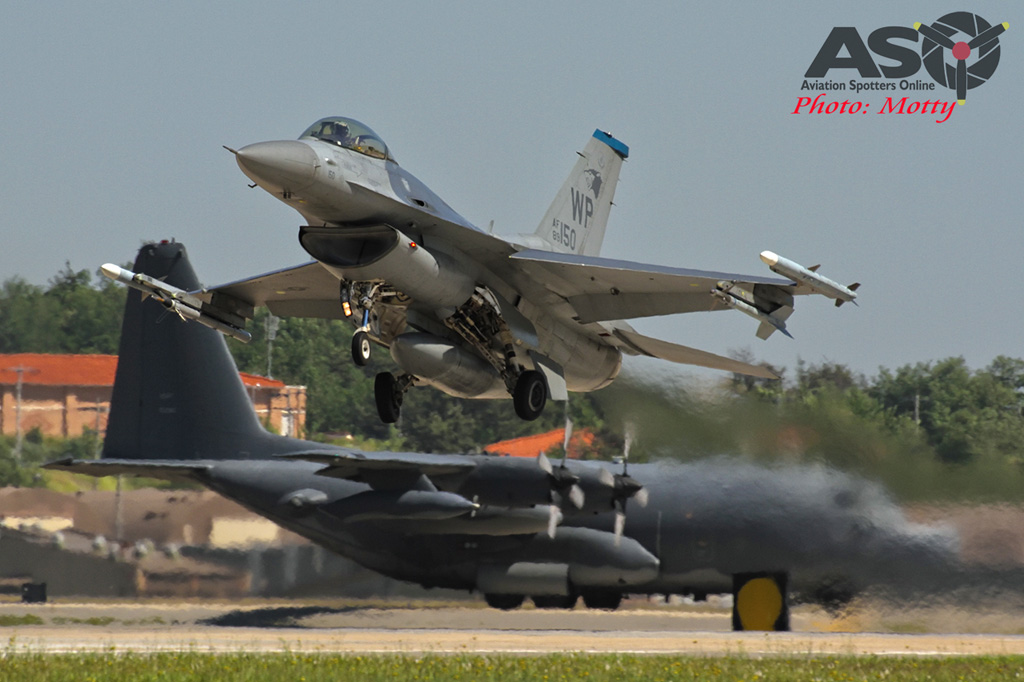 Another challenge is maintaining this level of readiness against a constant turnover of personnel and experience. A posting to Kunsan is classed as an unaccompanied tour as the service men and women cannot take their families with them but, because of this, they usually only serve a fixed period of one year at the base. This means that there is a constant rotation of new people coming in and experienced people rotating out, which places a high demand on training the new arrivals to get the experience, qualifications and in-theater knowledge that they need, as quickly as possible which is achieved by regular drills and exercises involving the whole base.  Because of this, there is a very fast-paced and task-focused team spirit to all aspects of the Wolfpack’s day-to-day activities that was very noticeable during my visit, with everyone having a great sense of purpose and pride in what they do. 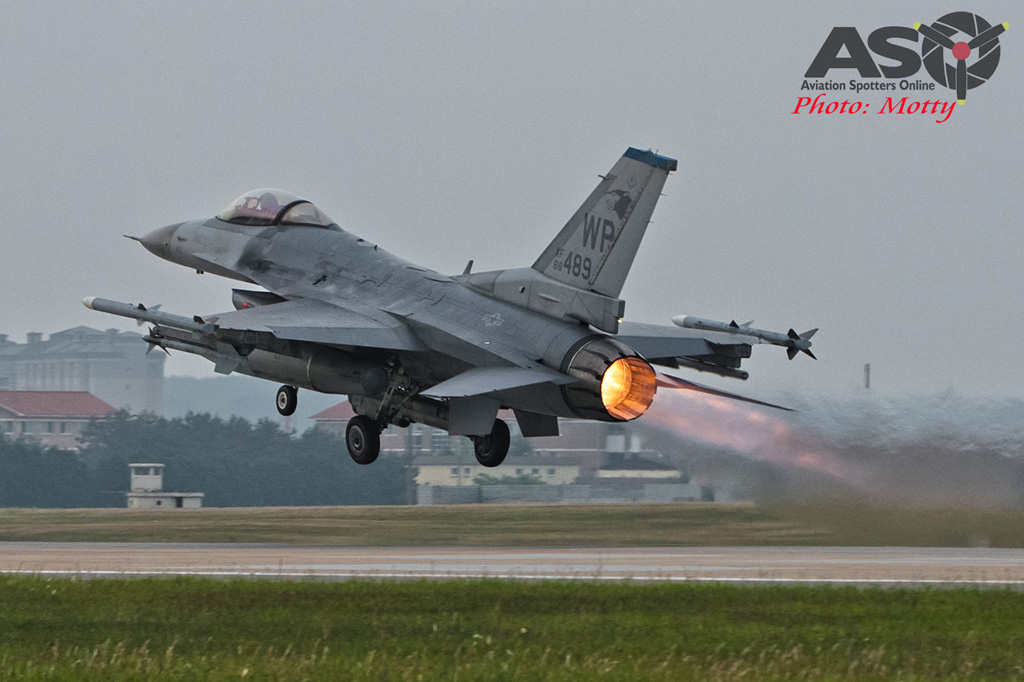 For those who like to travel and see the world, being stationed at Kunsan has provided them with an amazing opportunity to see Korea and all the sights, experiences and food it has to offer, with the (very) bright lights of the capital, Seoul, just a few hours away on the weekend, and many people that I spoke to told me how much they had enjoyed their time in Korea because of that. In spite of this though, often the most personal challenge for those serving at Kunsan is being away from their home, family and friends for the duration of their posting. But, yet again, the spirit of the 8th was very evident with the sense of camaraderie extending beyond the workplace to a family-like atmosphere within the team, where everyone knows each other and everyone is there to look out for their friends and help each other out. This extends beyond just the 8th FW too as there are also frequent social events and gatherings with the personnel of the ROKAF’s 38th FG as the Koreans are keen to ensure their guests feel welcome during their time away from home. Another common point which was made is how modern technology (Korea is one of the most technologically advanced and connected countries in the world) and social media have made it a little easier to keep in touch with loved ones and cope with the time away. 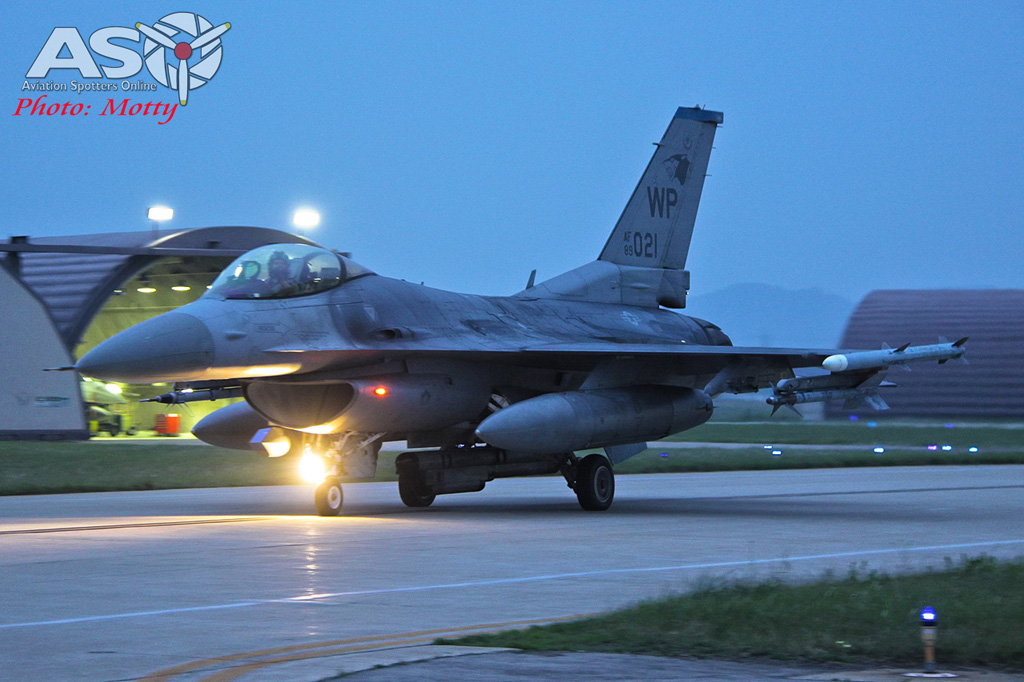 None of these challenges however, in any way hinder the 8th FW’s capabilities or mission readiness as they remain ever vigilant and ready to confront and overcome any challenges or duties they may be called to carry out, with a great sense of pride, professionalism and teamwork. If anything, the challenge makes them stronger. 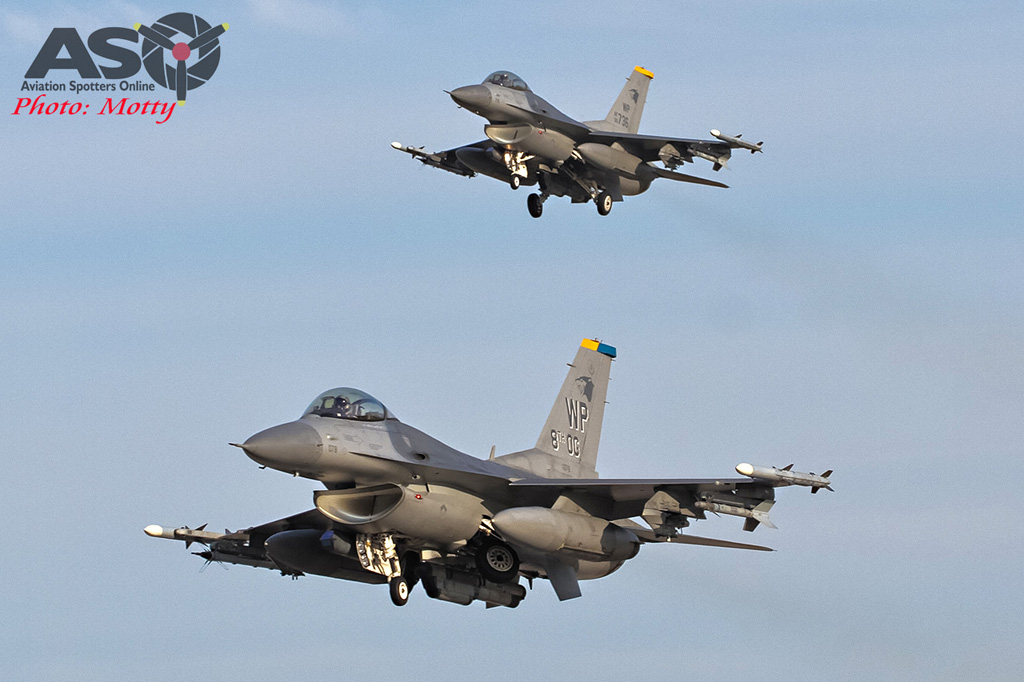 My most sincere thanks to the men and women of the Wolfpack and ROKAF 38th FG for making my visit possible and such an enjoyable experience. 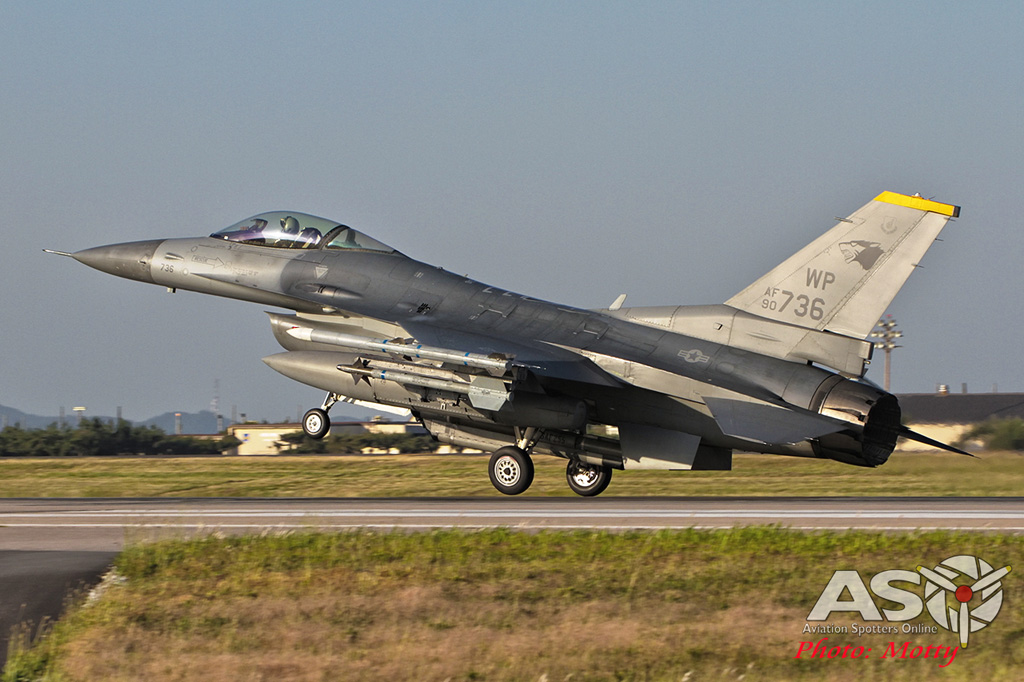