USMC Marine All Weather Fighter Attack Squadron 242, or VMFA(AW)-242 for short, arrived in Darwin back at the end of May 2017 for Exercise Diamond Storm, the Air Warfare Instructors Course (AWIC) and Arnhem Thunder. The “Bats” brought 10 F/A-18D’s with them, along with enough personnel and equipment to fulfill the two month deployment operating out of RAAF Base Darwin in the Northern Territory, Australia.

The squadron’s origin dates back to the 1943 formation at MCAS El Centro, California where Marine Torpedo Bomber Squadron 242 (VMTB-242) flew Grumman TBF Avengers from the USS Kitkun Bay. At the end of WWII the squadron was disbanded on return to the USA. Reactivation of the squadron in October 1960 saw Marine Attack Squadron 242 (VMA-242) flying the A-4 Skyhawk. The “Slashers”, as they were known as then, had their first in a long line of deployments to MCAS Iwakuni in 1963. After re-equipping with the A-6A Intruder they truly became an “All Weather” (AW) squadron which is now a designation applied to any current Hornet squadron that previously flew the Intruder.

During 1966, VMA(AW)-242 deployed to Da Nang Air Base where they adopted the nickname “Batmen” due mainly to their ability to perform attacks at night or in heavy weather. The shortening of their name to the “Bats” occured in the early 80’s while they operated the electronically improved A-6E Intruder. Transitioning to the current F/A-18D Hornet in 1990, they finally reached their current designation of Marine All-Weather Fighter Attack Squadron 242 (VMFA(AW)-242), along with adopting the motto, “Mors ex Tenebris,” Death from the Darkness.

Through the first decade of the new millennium, the Bats continued to deploy abroad, including the middle east (Operation Iraqi Freedom) and in 2008, while on deployment #9 to Iwakuni,  it was to become their permanent station. After 50 years combined at both Miramar and around Southern California, VMFA(AW)-242 became the USMC’s only permanently forward deployed Fighter-Attack squadron. While based at Iwakuni the Bats have been performing training with the Japanese Air Self-Defense Force (JASDF) or assigned deployments to participate in exercises within the south east asia region.

Which brings us back to this deployment – the Bats operating out of Darwin for the first time.

Arriving the last week of May with the support of KC-10A Extender tankers from the 60th/349th Air Mobility Wing – Travis AFB, the squadron soon settled into the BRA facilities at RAAF Base Darwin. Some personel arrived from Iwakuni via an Onmi Air International 767-300 –  outsourcing troop transport to the civilian sector is common practice these days.

They proceeded to set up maintenance areas and operations buildings and reconfigured the aircraft from the ferry set up of 3 external FPU-9/A tanks and some with a ‘pannier’ to just two tanks for local missions. Due to limited hangar space on base some maintenance was performed out on the apron in full sun. Fortunately it was Darwin’s ‘Dry Season’ which also made for much cooler nights than the during the humid “Wet”.

While performing missions during Exercise Diamond Storm in the Top End some aircraft were seen with a Litening Targeting pod fitted to the centreline station and the AGM-88E (CATM) could be seen loaded to an outboard pylon during the exercise. The AGM-88 is an Air to Surface missile designed to target electronic emissions from fixed or mobile surface-to-air radar sources. The CATM is a training version of the AGM-88E which contains a guidance and control section with electronics to allow acquisition and identification of targets. Other components such as the warhead and propellant (engine) are inert.

A sensor package modification called the ATARS – Advanced Tactical Airborne Reconnaissance System, was also observed on a couple of aircraft. This is a nose end modification only applied to a few F/A-18D aircraft across a few squadrons, and replaces the M61A1 Vulcan cannon installation. The ATARS system uses a Reconnaissance Management System, interfaced with the APG-73 Radar and gathers infrared and visible light imagery which is recorded digitally and can be transmitted via a datalink pod.

For Air to Air mission applications the radar guided AIM-120C-7 (CATM) is also carried by the F/A-18’s of VMFA(AW)-242, being fitted to stations on the fuselage, and again is a non-launcheable training weapon. For short range engagements the infra-red guided AIM-9X Sidewinder is utilised and carraige of a CATM version can also be seen on wingtip stations #1 or #9.

The Bats made the transition into the concurrently occurring Exercise Arnhem Thunder which is an exercise aiming to develop and hone advanced air-to-ground combat training, not just in delivering live ordinance accurately onto a heavily defended targets, but acheiving it after fighting their way in and then fighting their way out again without loss.

Arnhem Thunder provided VMFA(AW)-242 the opportunity for multi-ship Hornet strikes and self-escort attack missions while employing the Joint Direct Attack Munition (JDAM) which was carried on the outboard wing pylons. Essentially the JDAM is a guidance kit fitted to ‘dumb’ bombs and as such, converts those unguided bombs into a precision ‘smart’ munitions. Guidance is performed by an inertial guidance system coupled to a Global Positioning System (GPS) receiver meaning the weapon can be delivered in almost any type of weather conditions faced by the aircrews. The JADM kit can be fitted to both explosive and non-explosive bomb assemblies.

Like the Royal Australian Air Force, the USMC employ the Northrop/Grumman Litening advance targeting pod. The pod is a multi-sensor targetting device which is used by aircrews to search, detect, identify and track targets at range before deploying weapons onto that target.

By the 4th week in July flying had wrapped up and the squadron has now been focused on squaring away and preparing for the return trip home – to MCAS Iwakuni in Japan. Deployment equipment can often be freighted by civilian transported contractors. It is not unusual to see Atlas Air and Omni Air International working hand in hand with US deployments to Australia. Flying into Darwin this week were both a B747 and B767 from Atlas Air.

Two KC-135R Stratotankers arrived in preperation for the Air to Air refuelling role during the ferry trip to Iwakuni. One from the 151st Air Refuelling Squadron of 134th ARW Tennessee ANG, stationed at McGhee Tyson ANG Base, Knoxville, Tennessee. the other from the 197th Air Refuelling Squadron of 161st ARW Arizona ANG, stationed at Goldwater Air National Guard Base, Phoenix, Arizona.

Both tankers are fitted with the drogue kit, essentially a standard boom, with a hose and drogue attachment that allows theKC-135R to accept recievers with refuelling probes, like the F/A-18 has, instead of the boom receptacle like on F-16’s. A typical scenario with two tankers usually provides support the first 6 Hornets (in this case) – with one KC-135R returning to drag the remaining aircraft home the following day.

After more than two months from their initial arrival, the crews and aircraft departed a dry RAAF Base Darwin on their way home to Iwakuni. We hope that the Bats had bit of a different experience while in Australia, not just the integration with the ADF during the exrcises, but enjoyed some ‘downtime’ exploring the local attractions – Croc parks and jumping tours, and the Katherine and Litchfield park regionns also.

With VMFA(AW)-242 being one of the last USMC Hornet squadrons to transition to the Lockheed F-35B, they will be operating the legacy Hornet well into the mid 2020’s. Possibly we will see them in the Northern Territory again some time for an exercise – they are certainly welcome.

A quick thank you to Capt J. of VMFA242 and the RAAF PAO during Exercise Diamond Storm. 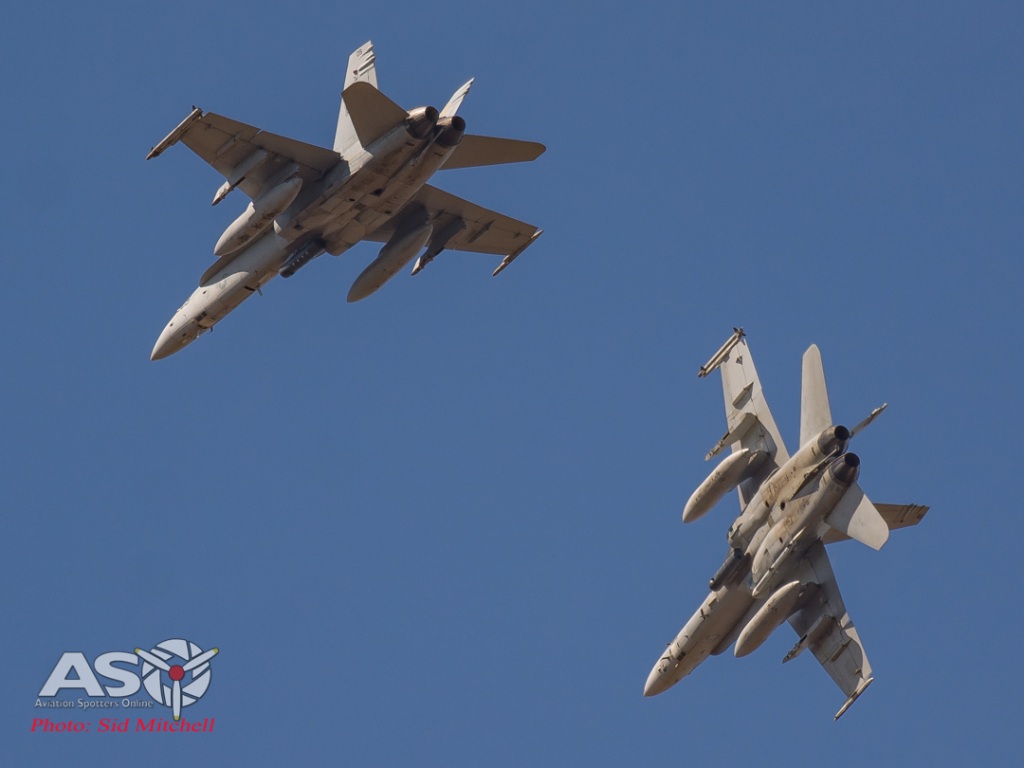 I make no apologies for writing and photographing as many aviation museums’ as I have here at Aviation Spotters Online. Nearly all are run and managed by passionate volunteers who wish to preserve and tell the story of aviation in relation to their country, area of operations, war zones or[…]

Exercise Wallaby Rockhampton Rockhampton is located a short distance from the Central Queensland coast and has what is classed as a major Australian Regional Airport. Rockhampton Airport services domestic flights from Cairns down to the Gold Coast and regularly hosts International charters as well diversions on its 2,568m[…]